A prelude to disaster?

A prelude to disaster? 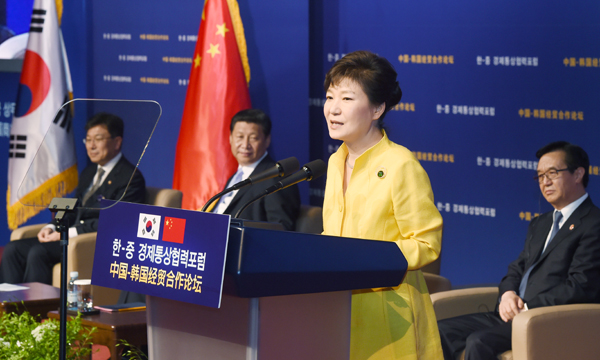 It is frequently noted that the Korean manufacturing industry is in a crisis, and the prime cause is the “China impact.” The situation in the manufacturing sector illustrates the magnitude of this. Samsung’s smartphone, the pride of Korean information technology, is being threatened by challengers like Huawei and Xiaomi. Its position as a global leader in the shipbuilding industry has long been replaced by Chinese companies. Steel from China is undermining Korea’s industrial foundation. Posco, which was the country’s third-largest steelmaker, has fallen to sixth after Hebei, Baoshan and Wuhan.

Throughout a diplomatic relationship that spans 22 years, China has been a blessing to the Korean economy. Korea exported parts to China, which has become the world’s factory, and shared the benefits of Chinese growth. Thanks to China, Korea found an escape from the 1997 Asian financial crisis and 2008 global financial crisis. But China is now threatening Korean industries, which are concerned that China is now a curse rather than a blessing.

China is changing. It used to work in harmony with Korea in terms of the division of labor. Korea used to produce intermediary goods to be assembled in China, but as Chinese companies - including foreign-invested ones - have advanced their technology, they now want to do it all themselves. China now has an industrial structure to manufacture parts and also assemble them.

Naturally, the paradigm shift is hurting Korea’s export. The export to China between January and July went down by 1.2 percent compared to the same period the previous year.

Experts say that an age of disaster will come and China will become a black hole. Park Han-jin, director of the Korea Trade-Investment Promotion Agency’s China department, is worried that the Korean industry could be completely swept up by China. In fact, semiconductor factories are moving to China, LCD plants have already relocated to China, and skilled jobs in Korea are being sucked into China’s black hole.

It is simple to determine whether or not China is a blessing or a curse. If we can keep a technological dominance over China, then it will be a blessing. But if not, it will be a disaster. We have high hopes for the Korea-China free trade agreement. If Korea has competitive products, China will be an extension of Korea’s domestic market. If not, the Korean market will be engulfed by Chinese products.

It is our own problem. Just as we proactively responded to China’s growth over the past 20 years and took advantage of the division of labor in East Asia, we have to draft a solid industrial structure to respond to the black hole. National research and the development capacity for technological innovation should be enhanced, and the corporate environment should be improved to invite investment.

Is the manufacturing sector crisis a prelude to a disaster from China? It is a question that Korea, not China, should answer.