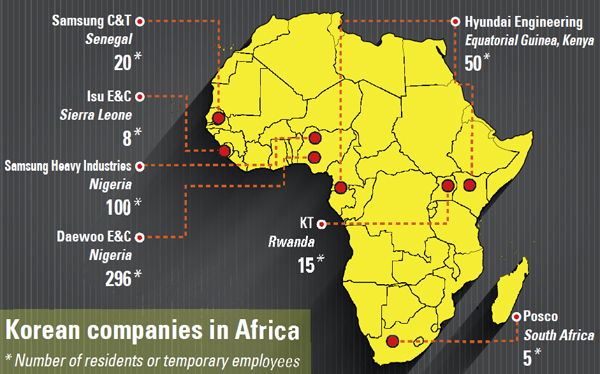 The outbreak of Ebola in West Africa is a concern for Korean companies working in the area, but an exodus of workers is unlikely because most don’t directly run businesses in the three West African nations where the deadly virus has been found.

So far, more than 800 people have died from Ebola in Sierra Leone, Liberia, Guinea, with three suspected cases in Nigeria, according to the World Health Organization (WHO). There is no known cure or vaccine for the virus, and the mortality rate can reach 90 percent. As fears rise, some Korean companies said that they have ordered their employees not to travel to West Africa after the Ministry of Foreign Affairs issued a warning.

Samsung Electronics and LG Electronics said they are closely watching the situation even though they don’t have employees working in West Africa. The two IT giants canceled business trips to the region.

Samsung Electronics has businesses in South Africa, Kenya, Ghana, Senegal, Sudan and Mauritius and has a TV and monitor plant in Beni Suef, southern Egypt, its only production base in Africa. It is also planning to construct a TV production plant in South Africa.

LG Electronics operates six subsidiaries in Africa, including a TV and monitor plant established in 2011 in Johannesburg.

Although Samsung and LG both have employees on business trips in Nigeria, they have not recalled those workers and are instead observing the situation. The companies said they required their employees in Africa to follow sanitation guidelines and advice as precautionary measures.

“There is no way that we are going to recall our employees traveling in Africa or restrict investments in Africa,” said a spokesman for LG Electronics. “When we recalled employees in Hong Kong when SARS broke out and those in Japan during the radiation leakage crisis, no one came back. If we withdraw the workforce from those regions, it means that we are not fitting in with the local residents and that is against our company philosophy.”

Hyundai Motor said that its Africa business is headquartered in Dubai, but has ordered its employees not to travel to West Africa.

“Even before the Ebola virus outbreak, we ordered employees to minimize business trips to Guinea and Liberia because of epidemic diseases and security concerns,” a company spokesman said.

Hyundai Heavy Industries said that in the past, its engineers have traveled to West African nations, including Liberia, to sell power generators, but none of them currently lives there. The nation’s largest shipbuilder said that after the vacation season is over, it will decide whether its workers can take business trips to West Africa.

Samsung Heavy Industries, a shipbuilding affiliate of Samsung Group, said it has about 100 employees dispatched to Nigeria to perform a floating production storage and off-loading (FPSO) project, and has not withdrawn them, although it ordered strong prevention measures.

Companies such as Posco and KT, which have workers dispatched to South Africa and Rwanda, respectively, said that they are continuing business as usual, as those countries have not been affected by Ebola, but both said they will monitor the health of their employees.

Local construction companies, such as Hyundai Engineering and Daewoo E&C, which have projects in Africa, said that they are also not planning to leave the continent as the outbreak hasn’t reached the areas where they conduct business.

However, Isu Engineering & Construction, which has been building roads in Sierra Leone, said that it is evacuating its workers from the country, including eight Koreans.

According to data from the Korea Trade-Investment Promotion Agency (Kotra), no Korean companies have employees living in Guinea, Sierra Leone or Liberia. About 430 employees of 15 Korean companies live in Nigeria, including 296 working for Daewoo E&C.

The airline and travel industries seem to be most sensitive to the outbreak and have prepared safety precautions. The WHO’s risk assessment for travel and transport has not yet recommended any travel restrictions or the closure of borders, but some foreign airlines, such as Emirates, have stopped flights to African nations where Ebola has been reported.

Korea’s two flag carriers do not fly to West African nations, but said they will observe the situation as passengers could arrive in Korea after transferring flights.

Korean Air Lines, the nation’s largest flag carrier, said yesterday it had a general meeting to discuss measures regarding the outbreak. The air carrier from Hanjin Group flies direct to Nairobi but has not changed that route because it is far from West Africa.

“We are monitoring it closely because there could be a passenger from West Africa who transfers in Nairobi,” said a KAL spokesman. “We are not thinking of shutting down the route, but there will be special instructions for our flight crew and employees overseas for the issue.”

Asiana Airlines said that although it doesn’t run any flights to Africa, it will also closely follow the situation.