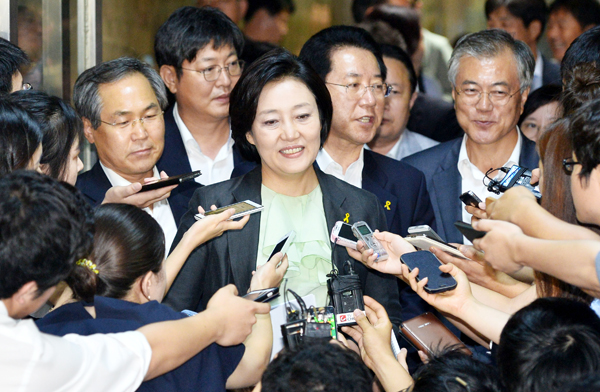 Park Young-sun, floor leader of the main opposition New Politics Alliance for Democracy answers questions from reporters yesterday following a general party meeting at the National Assembly. She was tapped to lead an emergency committee of the party, reeling from its crushing defeats in the July 30 by-elections. [NEWSIS]

The opposition New Politics Alliance for Democracy (NPAD) yesterday chose floor leader Park Young-sun to take the helm until a party convention early next year, when it will elect members to fill leadership seats now vacant following the resignation of its co-chairmen, Ahn Cheol-soo and Kim Han-gill.

The NPAD selected Park to lead its emergency committee during a two-hour general meeting yesterday at the National Assembly that 104 lawmakers attended. In accepting that responsibility, the three-term lawmaker became the de facto leader of the main opposition, which was hit hard by stunning defeats in the July 30 by-elections.

“I told each lawmaker [during the meeting] that I will [help the party] overcome a number of difficult challenges with the support of each member, especially at this time, when crisis is engulfing the party,” she said yesterday before a pack of reporters at the National Assembly.

In a statement released shortly after the meeting, the NPAD said it will soon select members for the emergency committee from both inside and out of the party. It added that its next party convention will take place sometime between January and March.

The major opposition’s general meeting yesterday came three days after Ahn and Kim stepped down from their posts to take responsibility for the crushing defeats endured at the polls.

In her new role, Park is faced with the arduous task of finding a way to unify the different factions within the party.

With Ahn gone, his supporters, who hold more centrist positions, will likely lose their sway, while a group of lawmakers led by Moon Jae-in who formerly served under the administration of late President Roh Moo-hyun could move to steer the party in a new direction.

During the party meeting, Kwon Eun-hee, who was elected to represent Gwangsan-B District in Gwangju, also appeared before her colleagues to deliver her acceptance speech.

The former police official found herself at the center of controversy last year after the bombshell revelation that she was pressured by her superiors to go easy on the National Intelligence Service in an investigation into its illegal online smear campaign against Moon, the former presidential opposition candidate, in the 2012 presidential election.

Kwon earned high praise from the major opposition for revealing what it argued was an obstruction of justice. However, the NPAD’s decision to nominate her to run in Gwangju raised suspicions - largely among the conservative block - that her actions were made with the intent to enter into politics.

Despite her win, many political observers argue that the former police official’s victory came at the expense of other key races in the capital region, in which the NPAD secured just one win and suffered five defeats.

The loss in the Suncheon City-Gokseong County race in South Jeolla also struck the NPAD hard. It was the first time a liberal candidate was beat out by a conservative rival in South Jeolla in 26 years.

As the NPAD scrambles to regain its footing, questions have arisen over whether the party will reinstate itself as the Democratic Party.

“A party name is the essence of its character,” said one party official, who spoke on the condition of anonymity. The source added that with Ahn and Kim now gone, the New Politics Alliance for Democracy had lost its “political legacy.”

If the NPAD’s emergency committee decides to reinstate its former name at its party convention next year, it would likely serve as another humiliating blow for Ahn and his supporters in the party.

The NPAD was launched, the result of a merger with the Democratic Party, in March with 127 members from the DP, and two lawmakers from Ahn’s camp. One of the two was Ahn himself.