Forensics shines a light on death

Forensics shines a light on death 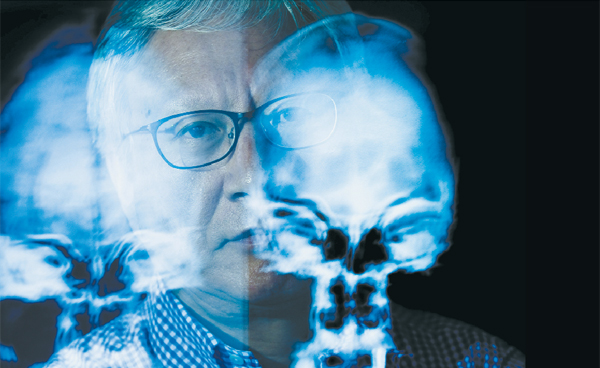 Lee Yoon-seong, a forensic medicine professor at Seoul National University, compares and analyzes two X-rays of a patient from before and after his death. By Kwon Hyuk-jae

The man died in the dark. There were no witnesses.

When the first bus of the day came out of the terminal that doomed morning, his fate was sealed.

The driver insisted that he saw a man already lying in the road, though the victim’s outraged relatives adamantly opposed that version of events.

The legal conflicts among the parties involved seemed to ensue forever. But in the end, the answer to what actually transpired that day was unveiled through forensic examination.

Lee Yoon-seong, a forensic pathologist at Seoul National University, was the one who conducted the autopsy on the man who died in the street that morning. In post-mortem examinations, it is often unusual for medical experts to focus on the limbs, as in most cases they rarely illustrate or explain the cause of death. But in this instance, Lee was drawn, in particular, to the man’s legs.

"If he was standing when he was run over, his legs would have likely been damaged,” he said.

The results were exactly as he had expected. There was no trauma to the man’s lower extremities, but it was evident that his torso had been pounded by the oncoming bus.

The victim’s blood alcohol levels were also off the charts, indicating that he had been intoxicated at the time of the accident. In his final report, Lee concluded that the man had been lying down, passed out in the street, when he was hit by the bus.

The driver was subsequently cleared of any responsibility for the incident. “Forensic science focuses on human rights to clear the names of both the living and the dead,” Lee asserted.

Forensic pathology has become much more familiar to the public over the past few years thanks in part to scientific dramas, and it is trend that has made the field seem all too clear-cut for audiences and fans alike.

In real life, the most relevant case in recent weeks - and the one that also produced the most headlines - was that of the discovery of the body of Yoo Byung-eun, the elderly patriarch of the family behind the doomed Sewol ferry, and the odd circumstances surrounding his death. 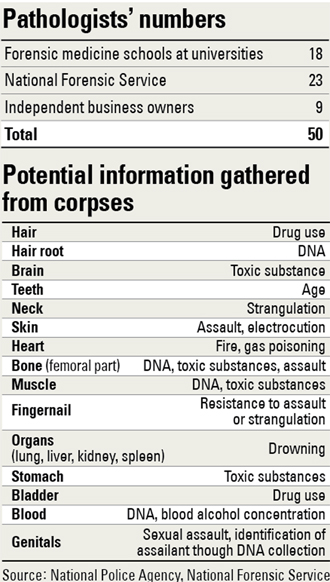 The National Forensic Service (NFS) announced on July 25 that the decayed corpse found in a plum orchard in Suncheon, South Jeolla, in early June did in fact belong to the fugitive billionaire. The revelation sparked tremendous controversy, raising questions over Yoo’s grisly end; the competence of the police, prosecution and the government in hunting him down; and the real sequence of events behind the announcement.

It took nearly six weeks for local police to identify the 73-year-old after his body was discovered on June 12, and the result of the second autopsy by the NFS provided few clues to the cause of death.

“We performed the autopsy based on some probable causes: bodily injury, poisoning, disease and other external forces,” Seo Joong-seok, the head of the NFS, said at the time. “But it was impossible to determine the cause of death because Yoo’s body had already undergone a very advanced stage of decomposition.”

But while forensics may feel all too familiar thanks to media and popular television programming, there’s still much about the profession that is little known among the general public. And while forensic science is used largely in criminal cases to gather evidence and find answers, it is also conducted in other fields, including archaeology, astronomy and botany.

Reporters from the JoongAngIlbo recently met with both first-generation experts and young researchers in the field of forensic science to hear their stories and find out more about their day-to-day tasks and the difficulties associated with their jobs.

One such expert, 89-year-old Moon Guk-jin, has the distinction of being the first forensic pathologist in Korea. He happened upon forensic medicine one day after he wandered into a secondhand bookstore to take shelter from the rain. The book he found, “Forensic Science Story,” by Japanese doctor Furuhata Tanemoto, changed his trajectory.

At that time, there was no institution that taught forensic medicine, but Moon finished the text in one sitting simply out of curiosity.

After that, his mind was made up.

“When I took it into my head to become a forensic pathologist and visited my mentor Jang Gi-ryeo [1911-1995], who was a medical doctor at Seoul National University, he angrily dissuaded me, saying that it is not even a field of study,” Moon said.

“But when I heard that, I just wanted to become a forensic doctor even more.”

Moon later went on to become one of the founding members of the NFS in 1955 and has handled countless cases since. “Starting monthly salary at the NFS then was 3,000 won ($2.90), only enough for a sack of rice,” he said. “At the same time, a friend of mine who was working at the municipal hospital received 15,000 won a month.”

One of Moon’s most memorable cases involved gathering critical evidence in the 1968 murder of a woman found dead at a Han River dock. He discovered a bite mark on her body, which eventually helped the police to determine that her husband had killed her.

It was the first case in Korea in which legal enforcement agencies conducted a criminal investigation based on dental impressions and ultimately led the NFS to hire forensic odontologists.

Today there are about 50 forensic pathologists in the country, and most of them, like Moon, forewent higher salaries in taking up the profession.

“There are enough clinical doctors. I wanted to have a job that was less known, and which I felt was more worthwhile,” said Park Ui-wu, a forensics professor at Konkuk University.

“Forensic doctors are usually the people who gave up lucrative careers as clinical doctors, and have a sense of duty that they will not leave anyone to die in vain,” added Park Jong-tae, the president of the Korean Journal of Legal Medicine and a professor at Chonnam National University’s medical school.

And it is that sense of responsibility has sometimes even impacted history.

In a widely publicized case in 1987, 21-year-old Seoul National University student Park Jong-chul was found to have been tortured to death by police. At the time, authorities initially announced that he had died of shock, after being hit just once by an officer.

However, it was attending physician Hwang Jeok-joon, a forensic pathologist at the NFS and an honorary professor at Korea University, who concluded Park had died from asphyxiation, which indicated he had been beaten to death. Hwang stayed true to his conscience, standing against the military government at the time, which sparked a pro-democracy movement.

For most pathologists, conducting post-mortem examinations is a primary part of their job, in which they determine the cause and time of a person’s death by dissecting a corpse and closely evaluating it.

According to the National Police Agency, about 25,000 people die in Korea annually by unnatural causes, though only 16 to 20 percent undergo an autopsy due to the extensive belief in Korea among the older generations that dissecting corpses kills the person twice. That figure is much less than in the United States, for instance, where autopsies are conducted about 40 percent of the time.

Most exceptions are made in criminal cases, in which the prosecution may request an autopsy. Forensic doctors in the NFS usually conduct such examinations, but sometimes pass on testing to forensic pathologists serving at universities. “Men are not god, so some mysterious deaths aren’t cleared up in the end,” said Chae Jong-min, a forensic pathology professor at Kyungpook National University. “Forensic science involves finding the most reasonable answer using a range of medical and scientific knowledge.”

But despite the advancements made in the field over the past 50 years, working as a forensic pathologist isn’t an easy task, with high competition and few job options.

Aspiring students must spend six years at medical school and another five years working toward becoming a specialist. Afterward, most start their careers at forensic medicine schools at universities - though only 11 out of 41 medical colleges nationwide have them. The NFS also restricts the number of its forensic doctors to 23, with only one or two applying each year.

“Universities don’t like forensic medicine because it isn’t profitable,” said a forensic doctor who requested anonymity. “Many forensic medicine schools have only one professor. I worry they may close if there is no replacement for them.”

Many advocates of the profession maintain that there is a need for more forensic pathologists as well as more specialists dispatched to crime scenes.

In Korea, forensic scientists only conduct autopsies upon request, whereas in the United States and Europe, for instance, forensic doctors commonly accompany the police during initial investigation efforts.

Ideally, “there should be [at least] 200 to 300 forensic pathologists [available] so that they could be dispatched to crimes scenes,” Lee said.