Bluewings, Motors will put skills to the test

Bluewings, Motors will put skills to the test 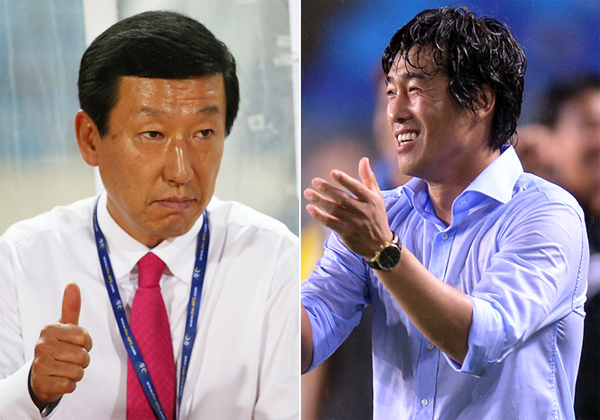 The Jeonbuk Hyundai Motors and the Suwon Samsung Bluewings will battle tonight as competition for the 2014 K-League Classic title intensifies.

There will be a fierce fight for the title among the league’s top five clubs, including the two playing tonight and second-placed Pohang Steelers, with the gap between the top-ranked Motors and fifth-placed Chunnam Dragons at just five points. Tonight’s match will be one of the closest clashes in the league, as the Motors and Bluewings have been the two best teams in the second half of the season, which started after the Brazil World Cup.

The Motors earned 14 points in the second half, winning four and drawing two of their six matches. They have also been showing off their league-dominating firepower by scoring 15 goals while only allowing two. They are leading the league with 35 earned points with a record of 10 wins, five draws and three losses, putting them one point ahead of the Steelers.

In their six second-half matches, the Bluewings have won four, drew one and lost one. They allowed 12 goals in the matches, but also scored 12, balancing their weak defense with a strong offense that helped them take down the Steelers 4-1 on Sunday. The Bluewings are third in the league, only two points behind the Steelers.

The two clubs will play at Jeonju World Cup Stadium.

The Motors’ offense will be led by veteran striker Lee Dong-gook along with forward Han Kyo-won and Brazilian forward Leonardo Rodriguez, who has scored four goals in 17 matches. Central midfielder Lee Seung-ki will help the three make scoring chances with his speed and accurate passing, and they also have excellent substitutions who can change the game late in the second half, such as Lee Sang-hyub and Brazilian midfielder Kaio Goncalves.

Their defense is also reliable. Alex Wilkinson, who played for Australia in the World Cup, has definitely brought stability along with Jung In-hwan.

The Bluewings have seen big improvements to their offense from Brazilian forward Roger Rodriguez, who was awful at the beginning of the season. He was named Round 18’s most valuable player by the league after he scored a goal and an assist against the Steelers.

“He had a hard time adapting to the league, but it looks like he is much more focused on the field now,” said Samsung Coach Seo Jung-won.

Behind Rodriguez, Go Cha-won, Seo Jung-jin and Natanael Santos, who has scored four goals and had two assists in the past six matches, will be placed up front.

“The match between these two teams could change the competition for the league title,” said football analyst Han Jun-hee.

“Since the Steelers have struggled lately after losing some players due to injuries, the two may be the real contenders for the title.”