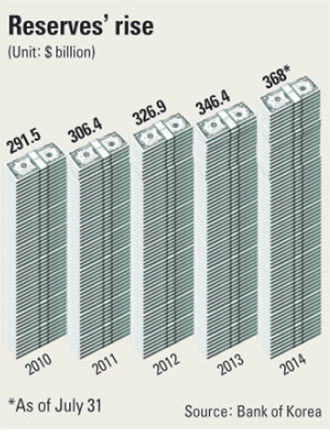 Korea’s foreign exchange reserves recorded a 13-month high last month largely due to the central bank’s efforts to buy up dollars and euros to keep the strong won under control.

According to the Bank of Korea yesterday, foreign exchange reserves reached $368 billion as of July 31, up about $1.5 billion from June, increasing for the 13th consecutive month.

This year, the country’s foreign exchange reserves have grown by about $21.6 billion. The central bank said most of the increase stemmed from profits related to foreign asset management.

The nation’s foreign reserves are composed of securities worth about $335.6 billion, foreign currency deposits of $21.7 billion, $4.79 billion in gold, special drawing rights (SDR) worth $3.48 billion and an IMF reserve position of $2.45 billion.

The securities include treasury bonds of other countries, government agencies and foreign businesses.

Korea has the world’s seventh-largest level of foreign exchange reserves. China has the biggest foreign reserves at $3.99 trillion, followed by Japan with $1.28 trillion.

With the largest-ever foreign exchange reserves, Korea and its economic fundamentals may be stronger, but at the same time the growing reserves cost the nation more and more to maintain the status quo to minimize external risks due to the strong won.

The government issues bonds with higher rates than normal for the foreign exchange equalization fund and uses the fund to invest in advanced countries’ government bonds that have relatively low yields.

Last year, the Bank of Korea posted a loss of more than 40 trillion won ($38 billion), according to the National Assembly Budget Office.

In June, the government issued foreign exchange equalization fund bonds of $2 billion, which may lead to bigger losses this year.