Classical composer a trailblazer for women

Classical composer a trailblazer for women 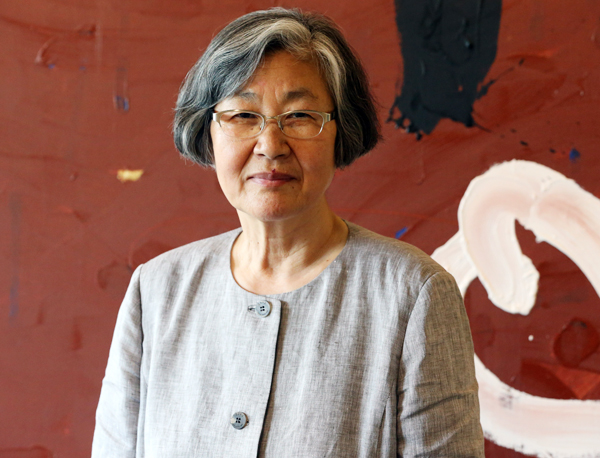 Korean composer Younghi Pagh-Paan, 69, who is better known outside of the peninsula, recently visited her hometown Cheongju, North Chungcheong. By Choi Jeong-dong


Composer Younghi Pagh-Paan, 69, is a proud Korean, but she is, in some sense, better known outside of her home country.

Pagh-Paan, who is also known by her Korean name, Park Young-hi, is often referred to as the “Godmother of modern European music.” One musicologist praised her by stating that Pagh-Paan has set up a base for female composers to follow in her footsteps.

In 1994, Pagh-Paan beat 70 other competitors to become the University of the Arts Bremen’s head composition professor and is now the institute’s vice president.

In the conservative world of classical music, Pagh-Paan was the first female composer to obtain such an esteemed position in higher education in a German-speaking country.

Twenty years later, there are still only three female professors in university composition departments throughout Europe.

These are not Pagh-Paan’s only achievements. Carrying the momentum of being the first female winner of numerous international competitions, Pagh-Paan became the first female composer to premier a commissioned piece at the prestigious Donaueschingen Festival in 1980.

It was then that the musician gained international attention for the orchestral piece “Sori,” which was inspired by Korean peasant music.

The title in Korean means “sound.”

Since then, Pagh-Paan has been a regular judge at renowned classical music festivals and has frequently composed commissioned pieces for such events.

Also of note is the fact that the Paul Sacher Foundation in Basel, Switzerland, possesses a full collection of Pagh-Paan’s works, including sketches, drafts and final copies.

As a female composer, she’s the third to be featured at the Paul Sacher Foundation. The foundation houses a large depository of music materials, including those of Bach, Mozart and Beethoven, and encourages scholarly investigations into music.

To hear more about Pagh-Paan’s world of music, the JoongAng Sunday sat down with the composer for an interview.

Q. It seems like you’ve grafted Korean sentiments and styles into contemporary music.

A. I try to give Korean titles to my works. The setting for “Sori” is May 1980 in the city of Gwangju after the 1979 assassination of then-President Park Chung Hee. When expressing the meaning of the event in notes, the musical problems like the scales, the rhythm or the whole composition is of secondary importance. In “Sori,” I used the nongak [traditional Korean music performed by farmers] rhythm of Jeolla Province. It also contains the plaintive song hyangduga [a folk song sung by pallbearers at a funeral]. I actually collected the lyrics of hyangduga and the tunes from the late ’70s.

Tell us what process you go through when you compose music.

It differs for every composer, but for me, the research period is especially long. It takes me between four to five years.

When I was writing the opera “Mondschatten” [Moon Shadow], I studied classical Greek tragedies. If I can’t get the whole picture in my head, from the beginning of the music to the end, I cannot start the composition.

But once I have the whole image in my head, it doesn’t take that long for me to actually write the music. For short pieces, it takes me about six months, and for large orchestral pieces, it takes about a year.

Can we interpret “Mondschatten” as an attempt to fuse the East and the West?

It’s not a fusion, but something that you see together. It’s putting the teachings of Lao-tzu, [the founder of Taoism], and the ancient Greek tragedies side by side, and studying what similarities they have or how different they are. Personally, I think fusion is mixing this thought and that to create something that’s neither one nor the other.

For me, things are black and white. It’s either this or that. I use different sounds for the two different themes. The music for the scenes that include Lao-tzu’s philosophy or where it uses a poem by Han Byung-cheol’s, and the scenes where Oedipus yells at his children are totally different. 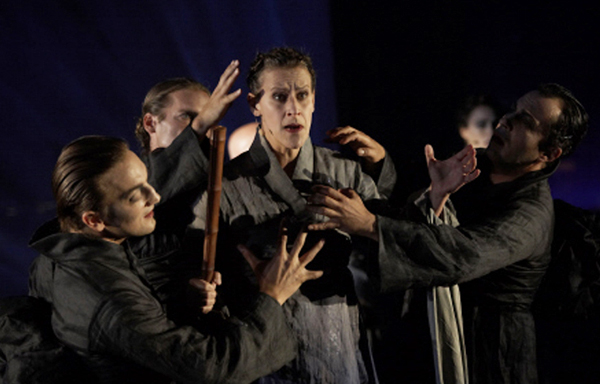 How are music, society and community interlinked?

I believe a composer should always open his or her heart and ears towards society. Composers are not those who live in the mountains, isolated from the community, to write music. They play a role in society.

Music should find its way into society and interact in various events. An ideal size would be a district in Seoul, for example. An event held in the whole city will be too big. It doesn’t matter where the events are held. It could be a park or a square.

Has your religion affected your oeuvres?

For me, religion is more about what kind of life I live rather than being merely about going to heaven or praying. In 2005, I received four booklets about the second Korean priest, Father Thomas Choi Yang-up (1821-61), from the Roman Catholic Diocese of Cheongju. Since then, I’ve composed many works thanks to the inspirations I’ve received from the priest. At that time, I was seeking to find out what it really means to be humble. I was able to find out what it means to live a humble life by offering yourself through Priest Choi’s life. He was indeed a formidable genius who was ahead of his time.

Is it true that the more one knows about musical composition, the better they can understand music?

No. You don’t need to learn about composition or anything about music. It doesn’t matter if you had an opportunity to learn a musical instrument or not. Many of the audiences I know don’t even know what “do, re, mi, fa” is. When people go to concerts, I want them to leave everything they know about music at home and just listen with an open heart.

What’s so great about listening to music?

Listening to music regularly enriches your sensitivity. Many middle and high schools in Europe, including Germany, are reducing music classes, which will end up developing teenage violence rather than sensitivity. Listening or learning music during the formation of one’s personality makes people smarter.

Music is like mathematics in space and time. If you listen to music or learn music, you become smarter because your mind concentrates. You can’t listen to two different songs at once. Music classes at school can also be a time for students to be inactive - for them to really take a rest. Music also heals.

Among your many works, which do you feel most attached to?

It’ll be my very first and my most recent. The same reason applies to why mothers feel more attached to their first and youngest child.

No matter how famous you are as a best-selling novelist, an editor edits your work. What is it like for composers?

Even if you are a great writer, it doesn’t mean you are also a master of grammar. Editors do not edit writers’ crucial thinking, ideas or their philosophy. When I teach my students, I guide them so that they can correct what they have to correct by themselves.

If I make the corrections, my corrections will be all over the music score and they’ll think ‘this is not my tone. My teacher did this for me.’ If they start to think it’s not a work of their own, they could have antipathy toward their own work.

If I became born again, I would want to be a stay-at-home mother and raise my children at home. Then, when my kids grow old enough, I would want to be a novelist. Park Kyung-ri’s “The Land” greatly influenced me to become a composer. Also, when I read Park Wan-suh’s books as a young girl, I dreamed of becoming an admirable woman like her.

In order to further develop Korean music, what can the country or its government do?

In the case of Japan, when a Japanese composer gains international attention by winning prizes, the Japan Foundation launches into action. For example, the foundation will organize for the Japanese composer’s symphony piece to be performed by a Japanese soloist accompanied by a German orchestra.