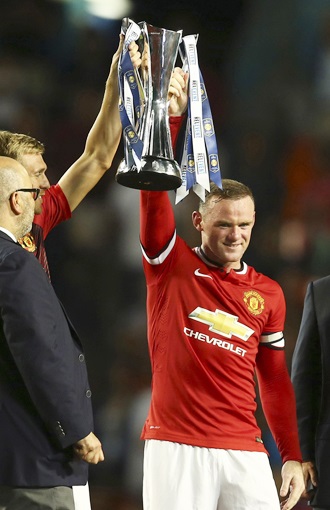 United ended its U.S. tour unbeaten under a new manager, Louis van Gaal, and a victory over their rival was perhaps the sweetest way to sign off. They will now return to England to finish preparations for the Premier League season, which starts on Aug. 16.

Despite the win, van Gaal was in no mood to go overboard about his team’s pre-season, which also included a 3-1 victory over European champions Real Madrid on Saturday.

Asked what the value of the tournament win was, van Gaal said: “Nothing. It’s nice, nice for the fans in the U.S. and also at home, that we have beaten Liverpool, not our favorite opponent for United fans, and I think we have given a lot of pleasure to these fans and that is important.

“Of course it is better to win preparation games than to lose, but the most important game is against Swansea City, our first game, at home, in the Premier League - that we have to win,” he added.

Both managers went with their strongest possible teams for the game, played in front of 51,000 fans at a rainy Sun Life stadium in Miami.

Liverpool began brightly and took the lead in the 14th minute when the lively Raheem Sterling was brought down in the area by United defender Phil Jones and skipper Steven Gerrard drilled home the penalty.

The Merseyside team should have doubled their advantage shortly after halftime, but Rickie Lambert fluffed his shot after finding space inside the area.

United equalized in the 55th minute when Mexican forward Javier Hernandez delivered a cross deep to the back post and Rooney coolly side-footed home a cushioned volley from a tight angle.

Manchester United had the ball in the net again after a high cross from Ashley Young looped over Mignolet and appeared to bounce back off the woodwork to Rooney, who side-footed home.

American referee Mark Geiger signaled a goal, but images on the stadium’s giant screen showed the ball had gone over the bar and bounced back off the stanchion.

After consulting with his linesman, Geiger changed his decision and ruled out the goal.

United did get a third two minutes from time, substitute Lingard blasting home from 18 yards to seal the win and wrap up the eight-team tournament victory.

Liverpool Manager Brendan Rodgers felt the scoreline was unfair on his team, who could have had a second penalty in the first half after Ander Herrera’s challenge on Sterling.

“Overall I am delighted with the whole tournament what it has done for us,” he added. “We have been away a long time, we have worked very, very hard ... we have some positives and we look forward to the new season.”

United starts its league campaign against Swansea on Aug. 16 at Old Trafford while Liverpool faces Southampton at Anfield the following day.