U.S. puts North on the back burner

U.S. puts North on the back burner 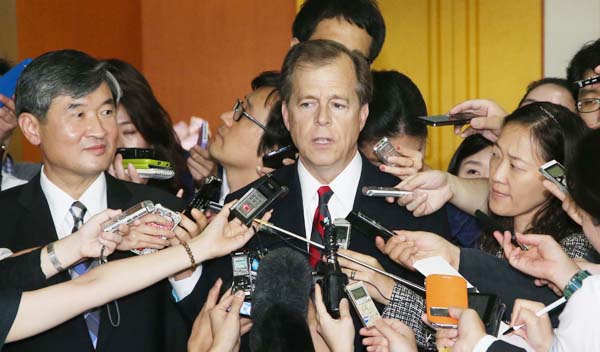 The representatives agreed that Washington’s North Korea policy has come to an impasse. It is no longer effective. Republican Representative Scott Perry said that the strategic plan of pressuring North Korea and waiting for changes had been proven ineffective and asked how long the United States would wait. House Asia-Pacific Subcommittee Chairman Steve Chabot said that the North Korea policy had been shattered. The attendees came up with various ideas. Some even proposed a pledge to China that the U.S. Forces would not have bases in the North, should the Korean Peninsula be reunified, to reassure China and obtain their help in pressuring the North.

Davis, who is an envoy to the six-party talks, was also skeptical. He said that dialogue is not possible unless North Korea shows its willingness to denuclearize, but the possibility of Pyongyang voluntarily abandoning its nuclear weapons is slim. Undoubtedly, talks will not be easy.

What’s more serious than that prospect is indifference. America’s foreign policy priorities have been changing since the Ukrainian crisis, the conflict between Israel and Hamas and the crash of the Malaysian airliner. It is not likely that the United States will make major efforts to solve the challenging North Korea problem. Americans are unstirred even when Pyongyang threatens to turn Washington into a “sea of flames.” North Korea has launched a great number of missiles lately, but Secretary of State John Kerry said at the end of last month that North Korea had become “quiet.” There are low expectations that Pyongyang will take drastic measures. The North Korea issue is not a very popular subject among think tanks in Washington, either.

At this juncture, a special hearing on North Korea policy was held, but the contents were not very satisfactory. Three or four members repeatedly left and returned to the hearing, which was scheduled to last three hours but ended in 1 hour and 20 minutes due to low participation. One congressman said that North Korea was actually better than Iran as it only torments its own people.

Covering the hearing caused frustration. The United States knows that the current North Korea policy is not effective, but it is not likely to change its direction because Washington is becoming increasingly fatigued. North Korea may issue more serious threats to get attention from the United States, and in that case, all involved parties would face a catastrophe. How should we break through this deadlock? We can only hope for a miracle when Pope Francis visits Korea.