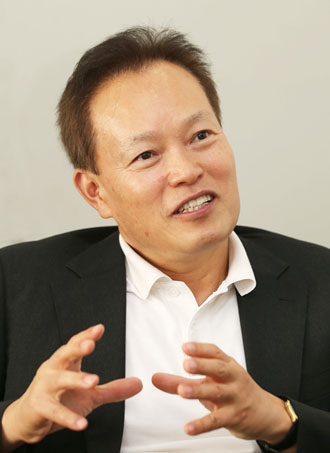 Baek Yong-ho, former chief of policy staff in the previous government, believes that there needs to be a change in the way people think in order for Korean society to move forward.

“For our society to move a step ahead, there needs to be a shift in the way of thinking by changing pre-existing ideas rather than creating new ones,” Baek said in an interview with the JoongAng Sunday last month.

Baek, 58, was a key official who influenced policies during the Lee Myung-bak administration. After resigning from the public post, Baek returned to school as a professor of policy science at Ewha Womans University. He also recently published “Baek Yong-ho’s Turnaround,” a book that details his experience in the public sector.

Baek has shown some regret over certain moments that occurred while he was chairman of the Fair Trade Commission and director of the National Tax Service, posts he filled before becoming chief of policy staff at the Blue House.

“I feel most regretful for not having had thoughts about long-term plans and not getting out of day-to-day issues while I was working in the public sector,” Baek said. “From the early stage of the [Lee Myung-bak] administration, I was too focused on resolving the global economic crisis, so I fell short in creating a growth foundation like corporate investment.”

Baek also added that to make Korea happier and richer, the country’s youth, who will become leaders of the next generation, should not lose their spirit and passion.

Q. It’s been a while. How have you been?

A. I have more spare time now than when I was in the public sector. This has allowed me to meet the people I want to meet, go hiking and read books. I go to university [to teach] twice a week. Last semester, I taught students about the market, the government and financial policy. After I resigned from the public post, I intentionally tried to meet young people. I was also requested by universities to give special lectures, so I had the opportunity to visit many regional universities, meet students and have discussions with them.

What kind of discussions did you have with them?

What I felt was that there was a sense of originality in these young people, which I had never thought about before. The thoughts young people have today are straightforward and mature. But as a person that has lived through the former generation, it’s sad to see them become discouraged with reality. Young people are more interested in getting jobs. The impression that I got was that what they want is a graduate job that connects with their major and dream. I realized that creating jobs is the most important policy.

Shouldn’t you have taken notice of this earlier when you were in the government?

It was very difficult back then to create decent jobs that university students all want to have. For example, there is a phrase “growth without employment.” The effectiveness of job creation is weaker now than in the past. Industries like automobile and shipbuilding have a big influence on job creation, but the effect is smaller in industries like IT.

Also, we now live in an era where labor is outsourced globally. This is the reason why the trickle-down effect wasn’t as big even though big companies exported a large volume [of their products]. Korea grew in a very short period of time, but what I think is that now it’s time for us to change the paradigm of growth. The country should grow based on a social infrastructure such as ethics, trust and social responsibility.

You published a book sharing your experiences. Can you share more information about it?

My experience in the public sector was very new to me. I had the thought that I should somehow organize and record what I went through. The experiences were very worthwhile, and I did my best, but I also feel some regret. In the book, I was only able to include half the episodes I went through. I have many documents, but as a member of the previous government, I believe it would be courteous not to talk about them for four to five years.

Let’s talk about the current state of Korea’s economy. You have experience teaching theories and also putting those theories into effect. Are there solutions to the crisis?

For the past 50 years, the Korean economy has faced a series of crises, such as the oil shock and other hardships. Whether or not the economy of a country develops is dependent on how leadership is executed. For this to happen, it is important that trust toward the government and its policies, as well as trust toward the market, is maintained. The reason we’re seeing trust in the market falling is because there are questions being raised about whether or not the Korean market is fair. The government should focus on social integration and market recovery.

You’ve been in powerful positions. Were there issues you feel you didn’t resolve back then?

There were many. I had the desire for all the country’s people to feel growth by resolving the economic polarization problem. But with more social pain due to polarization, there were even comments made back then that the middle class is breaking down. Also, I feel somewhat regretful for not having approached the real estate market and household debt issues more in-depth. There were really so many issues every day that I wasn’t able to fully think about a long-term vision.

In just one term, there were two big global economic crises - the Lehman Brothers crisis and the euro zone crisis. The government was very much preoccupied with resolving these problems in the early stage of the administration. Exports were robust but domestic spending was stagnant, which slowed down growth. The negative result was applied first to low-income households. We were not in the position to expand government expenditures because we had to maintain fiscal soundness amid the global financial crisis.

Then how should we solve these issues in the future?

There are several problems tangled into one. It has become even more difficult to solve the issue of polarization as our economy, from an industrial structural point of view, has entered a low-growth stage. This issue isn’t something that can be solved in a short period of time or within this administration. When it comes to real estate measures, there should be a change in how we understand the real estate industry. In the past, when the housing penetration rate was very low, the understanding was that there is one house for every household. But now, the penetration rate is over 100 percent. What’s important now is to invigorate personal rental businesses. [The government] should be very careful in easing debt-to-income or loan-to-value ratios at a time when household debt is [growing] seriously. Also, when policies change too frequently, economic subjects will become confused and transactions will contract, so it is very important to come up with predictable policies so that market participants are able to make rational decisions.