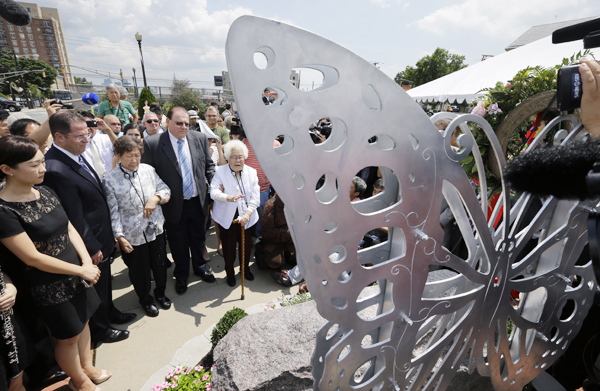 Lee Ok-sun, right, 87, and Kang Il-chul, third from right, 86, stand on Monday for the dedication of a monument to “comfort women,” a term that refers to the women and girls forced into prostitution by the Japanese military during World War II, in Union City, New Jersey. Lee and Kang are both surviving victims. [AP/NEWSIS]

The Korean government lodged a strong complaint against Tokyo yesterday for again promoting its claim over the Dokdo islets in the East Sea for a 10th consecutive year in its annual defense white papers.

It circled the area around Dokdo, which is located within Korea’s ADIZ, in red, claiming the region as its airspace.

The Japanese government in the defense papers claimed that Dokdo is Japan’s inherent territory, indicated that Dokdo is a part of Japan’s air space on its ADIZ map and demarked a unilateral exclusive economic zone, Korean Foreign Ministry spokesman Noh Kwang-il said yesterday. This is “another provocative action in regards to our Dokdo,” he said.

The papers also include text that states: “Japan also confronts unresolved territorial issues over the Northern Territories and Takeshima, both of which are inherent parts of Japanese territory.” Dokdo is known in Japan as Takeshima.

While the papers’ inclusion of a map and boldly worded language is similar to what was used in the 2013 edition, the move is seen here as Tokyo’s continued provocation regarding the dispute over Korea’s easternmost islands. It is also viewed as an impediment in improving bilateral ties.

Noh demanded that Tokyo withdraw such claims. “Our government cannot help but question what Japan’s intentions are,” he said.

“Japan’s territorial claims over Dokdo are seen as Japan showing an unapologetic posture toward its history of invasion,” he pointed out, adding that “the path toward the improvement of Korea-Japan relations will only become more remote if Japan continues with these inaccurate claims.”

The white papers come as Japan moves to bolster its military, enabling its right to collective self-defense through a controversial reinterpretation of its pacifist Constitution. Analysts point out that the 2014 white papers, in particular, serve as a way for the administration of Prime Minister Shinzo Abe to promote and reform its military policies.

Lee Sang-deok, the director general of the Northeast Asian Affairs Bureau in Korea’s Ministry of Foreign Affairs, summoned Takuya Sasayama, a senior official from the Japanese Embassy, to the government complex in central Seoul to lodge a formal complaint against Tokyo.

The Korean Ministry of National Defense also summoned a military attache from the Japanese Embassy yesterday to convey a similar message.

The Japanese government has included similar claims over Dokdo in its white papers since 2005, but analysts here point out that over time Tokyo has grown more forceful by illustrating its point with a map.

The report also added major additions to its section in regard to China, which is expected to increase tension with Beijing.

The report claimed that the increase in defense expenditures were “in light of the increasingly severe security environment [… and] in order to strengthen the posture for protecting the lives and property of the Japanese people and Japan’s territorial land, waters and airspace.”

It pointed to territorial disputes, the situation on the Korean Peninsula and the rising military power in neighboring countries as destabilizing factors in the Asia-Pacific region.