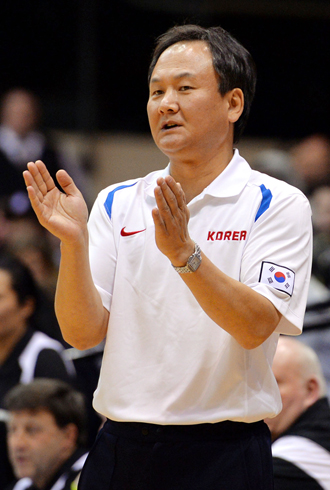 “Fans have shown that they still love Korean basketball, and now it’s our turn to return their love,” Yoo Jae-hak, the men’s national basketball team coach, said with resolve.

The Korea Basketball League on Monday announced its 12-man final roster that will compete in the International Basketball Federation’s (FIBA) World Championship, kicking off Aug. 30, and in the Incheon Asian Games this September.

Prior to the announcement, the 50-year-old Yoo said he would not select players based on whether or not they had completed their military duty - which a male athlete is exempt from if he wins a gold medal in the Asian Games - but will select those who can best compete on an international level. Basketball insiders and fans praised the coach’s roster, saying he had kept his word. It has been compared favorably to the roster for the national baseball team led by Samsung Lions Manager Ryu Joong-il, who filled around half of his 23-man roster with players who have not yet served in the military.

“Of course we want to win a gold medal in the Asian Games, but we will focus on the World Championship first,” Yoo said. It will be Korea’s first appearance in the championship in 16 years. The team, ranked 31st by FIBA, will compete with Angola (15th), Australia (9th), Slovenia (13th), Lithuania (4th) and Mexico (24th) in Group D.

“Our goal in the championship is to win one game,” the coach said. “After I saw that tickets were sold out for last week’s friendly match against New Zealand, I feel more responsible for running this team.”

Of the two games against New Zealand, Korea won the first 64-58, thanks to guard Cho Sung-min, who scored 16 points, but lost the second game 71-70. The stadium was packed for both games, with more than 6,000 fans coming out to show their support despite the games falling on weekdays.

The Korean Basketball League has struggled recently to attract an audience, especially after a match-fixing scandal involving star coach Kang Dong-hee, who was sentenced to 10 months in jail for trying to fix a game in September. 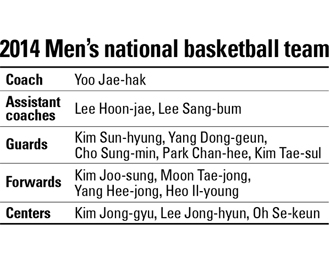 Yoo said his final roster was picked with the goal of winning gold in the Incheon Asian Games. He first chose 16 players, then let them compete and cut four of them, including the 221-centimeter (7-foot-3) center Ha Seung-jin.

“It looked like he needed more time to recover from his injuries,” Yoo said. “It is quite a huge loss for us because we don’t have many men as big as Ha in the country. I hate to say this, but we have to admit that our power and technique are very far behind our competitors.”

But the coach said there are some bright spots on the team. He said they were mentally strong and focused on their goal - winning a gold medal in Incheon.

“Some say there are too many veterans such as Yang Dong-geun [33], Moon Tae-jong [39], Kim Joo-sung [35] and Cho Sung-min [31], but we need these veterans to lead the team in international events like the World Championship,” the coach said. “They still play like they are in their mid-20s.”

The national team will head to Spain on Aug. 25 for the World Championship, and Yoo said he already has drawn up a big-picture game plan for each opponent.

“We will spend the rest of the time improving minor details that we saw we needed to work on in our 10 previous friendly matches,” Yoo said. “I want to ask fans to support us just like they did last week. I was able to see that fans still love Korean basketball, and I will try to return their love with our best play.”