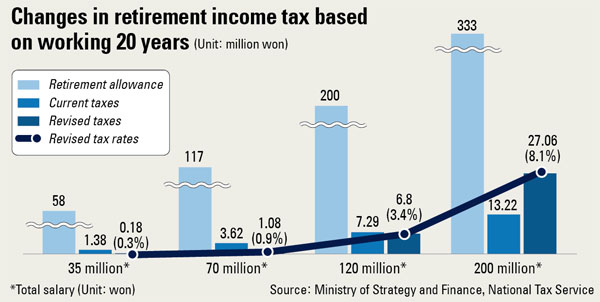 The government aims to raise 568 billion won ($549 million) in total tax revenue over the next five years. Official estimates are that conglomerates and high-income earners will pay 968 billion won more over that period, while small businesses and working-class people will pay 489 billion won less.

The controversial issue of taxing the internal savings of companies, which was introduced in the preliminary policy proposals of Choi Kyung-hwan’s economic team, is a cornerstone of the latest tax reform plan.

In order to accomplish its goal, the government will offer 10 percent and 5 percent tax deductions for small businesses and conglomerates that raise the average annual salary of their workers above its median for the past three years.

If these two measures are carrots for companies, the third is like a stick that will tax them if they don’t invest, or increase wages or shareholder dividends.

The government later will determine certain percentages for increases in investment, wages and dividends, and impose a tax of 10 percent on companies that fall short.

Under the scheme unveiled by the government yesterday, there are two new taxation systems that would operate for three years from 2015.

The government estimates that 4,000 companies with 50 billion won or more in capital will be subject to either of the two plans.

In Type A, 60 to 80 percent of net profit will be subject to taxation if the company doesn’t spend to increase investment, employees’ wages or contractor payments. This plan would apply to manufacturers that typically make substantial investments in facilities.

Type B is for the service and financial industries, which do not require such large investments. Under this plan, 20 to 40 percent of a company’s net profit would be taxed if it does not increase wages for employees or dividends.

“Specific rates will be stipulated in law and by executive order later,”

Moon Chang-yong, acting director general of tax affairs at the Finance Ministry during a briefing at the Sejong government complex on Monday. “The detailed rates will take into account the average investment percentage of each industry and related situations.”

The problem is that the ministry hasn’t yet come up with an estimation of how much it could raise from the new tax measure.

“The government’s ultimate purpose from this is to have a ‘zero’ effect on tax revenue,” said Joo Hyung-hwan, first vice finance minister. “It is more focused on persuading companies to make investments and increase employees’ wages and dividends by providing the aforementioned incentives, before trying to tax them.”

The business community welcomed the tax incentives for investment, but remained negative about the possibility of paying more in taxes.

“It is not fair that the government determines appropriate amounts of business investment,” said an official at the Federation of Korean Industries. “It is also absurd that the plan doesn’t count overseas investment, despite the increasing number of local companies going global.”

For the middle class, the government will reduce the tax rate for retirement allowances by replacing the single rate of 40 percent with a range of 15 percent to 100 percent from 2016.

Taxpayers with less than 120 million won in annual salary, about 98 percent of the total, would benefit from the plan.

Currently, a person who has been working for 20 years at a company and earns 70 million won annually would get 117 million won as a retirement allowance and pay 3.62 million won in tax. Under the plan released yesterday, the tax liability would be 1.08 million won.

On the other hand, those in the top 2 percent of earners would pay about 600,000 won more in retirement income tax, according to the government’s calculations.

The ministry plans to expand the tax deduction ceiling on retirement pension products from the current 4 million won to 7 million won to help the country’s aging population prepare for retirement.

For the elderly, the government also would raise the ceiling for tax exemption savings from the current 30 million won to 50 million won.

In addition, the ceiling on duty-free purchases by overseas travelers will be increased from $400 to $600, the ministry said.

“The latest tax reform plan has four basic directions: economic revitalization, stabilization of the working-class livelihoods, fair taxation and rationalization of the tax system,” said Choi Kyung-hwan, deputy prime minister for the economy, at the Taxation Development Deliberation Committee’s meeting held in Seoul yesterday. “It is time to use tax policy, as well as fiscal and financial measures, actively and aggressively in order to tackle the current low-growth problem of the economy.”

An intriguing difference of this year’s tax revision plan from last year’s is that the government now focuses on easing the tax burden on the middle class and inducing corporations and high-income earners to pay more.

Last year, the Finance Ministry under the stewardship of Hyun Oh-seok stuck to its principle of not raising tax rates, but slashed tax credits for people in both high- and middle-income brackets to raise revenue.

The revision will be submitted to the National Assembly by Sept. 23 for approval.