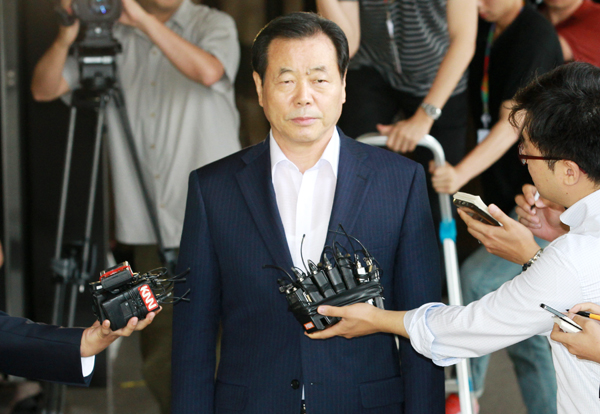 A ruling party lawmaker has been summoned for questioning over allegations that he received bribes from a local railway builder in exchange for awarding orders.

Prosecutors said that Cho Hyun-yong allegedly pocketed more than 100 million won ($96,800) offered by Sampyo E&C when he was the president of the Korea Rail Network Authority (KRNA) from 2008 through 2011.

The 69-year-old Saenuri Party lawmaker appeared at the Seoul Central District Prosecutors’ Office at around 9:50 a.m. yesterday. He denied the allegations in his responses to reporters as he walked into the law enforcement agency.

The questioning is part of a wide-ranging investigation into collusion between public corporations and private companies regulated by the state-run enterprises. Cho is the first incumbent lawmaker summoned in connection with the investigation.

The prosecutors probed Cho’s chauffeur, surnamed Wee, and other aides who recently testified that they had received money from the builder on behalf of Cho.

Given that the railway authority awarded Sampyo a deal to supply and construct railway parts in 2011, the prosecution suspects that the alleged illegal transaction occurred primarily while he was at the KRNA.

However, investigators have also alleged that Cho may have taken bribes until just recently, as his driver was hired last March while Cho served on the assembly Land, Infrastructure and Transport Committee.

The authorities said that they had obtained recordings of phone calls in which Cho discussed the bribes with his aides.

In the 2011 contract, Sampyo was selected to supply precast slab track, concrete panels that are placed beneath rails to provide track stability.

At first glance, the decision appeared legitimate: Sampyo was the first Korean company to make and install the precast slab track system.

During the system’s trial period, however, the Korea Railroad Corporation (Korail), which operates the Jungang Line, issued a warning to the KRNA stating that there were cracks between the panels in the Jungang Line test section.

Despite the warnings, the KRNA went ahead with the contracted plan and even struck further deals going forward, fueling suspicions that there might be an unlawful connection between the two.

The latest revelation involving Cho came after Kim Kwang-jae, who served as the president of the KRNA until January, committed suicide while he was being investigated for any potential involvement in the alleged railway corruption scandal.

He was investigated following testimony from a Saenuri Party spokesman, who said that Kim had received 30 million won from the chairman of AVT, another railway parts supplier.