Drone development flies under the radar in Korea

Drone development flies under the radar in Korea 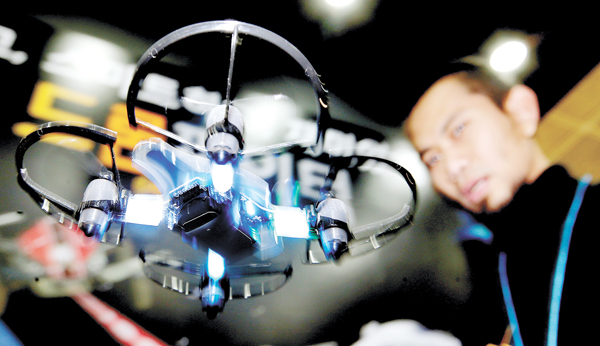 Early last month, the world’s largest online retailer Amazon asked the U.S. Federal Aviation Agency (FAA) for permission to test its unmanned shipping system Prime Air, which will use commercial drones to ship packages of up to five pounds (2.26 kilograms) to customers living near what it calls its logistics centers. The agency hasn’t given Amazon approval yet, but it is set to announce regulations for the use of commercial drones in 2015, and American commercial drone makers are looking forward to an increase in sales, according to a report by Korea’s National IT Promotion Agency (NIPA).

Though a U.S. government audit in late June reported that the FAA is likely to miss the deadline because it is still drafting safety standards, drone commercialization is getting a boost from some politicians, which may speed the process.

Since Amazon made its request, U.S. President Barack Obama is reportedly planning to issue an executive order for the National Telecommunications and Information Administration to come up with privacy and aviation guidelines for drones in the United States. Since regulations are so far nonexistent, there is major opposition to the drones due to concerns that the privacy and safety of American citizens could be at risk.

But many countries including the United States, the United Kingdom and Germany are still trying to grow the drone market by increasing regulations. However, in Korea, the process of commercializing drones seems like a distant future.

As in other nations, there is growing demand for personal drones, and Korean scientists say they have the technology to make them. But regulations in aviation and national security are an even bigger legal obstacle to developing the drone market in Korea than they are in the United States.

Realizing the potential of commercial drones, the Korean government last year said that it would nurture the industry as an economic growth engine, but has made little progress. 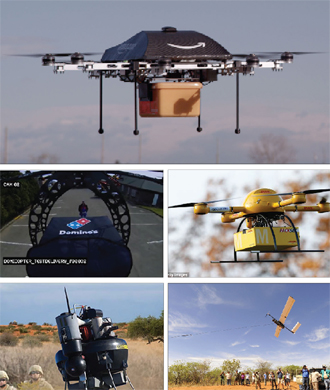 Drones, or unmanned aerial vehicles (UAV), were developed for military use, but the technology can also be applied to shipping, inspection, filming and photographing from the air.

Led by the United States’ drone laws scheduled to be drafted by 2015, the world’s commercial drone market is expected to reach $11.4 billion by 2020, with an average growth rate of 8 percent per year from $6.6 billion last year, according to the Teal Group, a U.S.-based defense industry analytics firm.

Analysts say military drones still take up more than 90 percent of the total drone market. According to FAA data, 41 percent of operational drones in the United States last year were used for research, followed by 33 percent for military, 24 percent for law enforcement and 2 percent for civil use.

Shipping, which falls into the civil category, shows the most promise for growth.

Amazon wants to implement its unmanned shipping plan within five years. It has completed building a shipping drone, capable of flying up to 10 miles. The drone carries a parcel weighing up to five pounds and can complete a shipment in 30 minutes. About 86 percent of packages shipped by Amazon are less than five pounds, according to a report by NIPA. Since the company has more than 100 headquarters worldwide, the report said that drones would become central to Amazon’s business.

Domino’s Pizza’s U.K. branch successfully tested drone deliveries last year by sending two pizzas to a customer’s house, about 6.5 kilometers (four miles) from the store. It took 10 minutes for the eight-winged drone called DomiCopter, developed by a British company, to deliver the pizza.

IT giants such as Google and Facebook are also getting involved, purchasing drone start-ups mostly with the aim of using the devices to provide super-fast Internet. Google acquired U.S.-based start-up Titan, which has a drone that flies up to 20,000 meters high, twice that of a regular drone. Facebook bought British start-up Ascenta, which makes solar-powered drones.

People who want to build their own drones gather online to share techniques and ideas. Chris Anderson, former editor in chief at Wired magazine, used to discuss ideas online but has now established a commercial drone start-up called 3D Robotics. The company, founded in 2009, produces drones as well as models to share with DIY drone builders. His company played a big role in raising the general public’s interest in drones.

According to the Ministry of Land, Infrastructure and Transport, 280 businesses and government entities have registered to operate drones as of late July, for purposes such as spraying pesticides in rural areas, inspecting wildfires and taking photos and videos from the sky. Despite the demand for drones, Korea limits the number of licenses to 280.

The ministry estimates that most drones in Korea are used in farming, followed by inspection, usually by government agencies, and all kinds of media-making.

Each regional aviation administration gives out licenses. Farmers must renew their licenses every month, while photographers, broadcasters and film companies that use drones for taping must get a license for each filming occasion.

JTBC, a television channel run by the JoongAng Ilbo, broadcast a special summer episode of its hit entertainment program “Hidden Singer” using a camera attached to a helicopter-like drone called a helicam.

Freelance photographer Cho Seong-joon, who occasionally files photos for foreign media outlets such as Bloomberg and The Economist, opened a studio in April that specializes in drone photography.

“I enjoy my drone photography,” Cho said. “The devices are expensive, ranging from 15 million to 20 million won, but recently, Chinese drone manufacturers like DJI rolled out low-end models for around 2 million won, which is a lot more affordable. This is creating a boom in Korea among amateur drone lovers and photographers.”

In Korea, imported drones are not hard to find at retail stores. I-Park Department Store in Seoul held a drone fair in July for so-called kidults (adult who enjoys toys) to introduce helicam drones and drones imported from France for racing.

When it comes to technology, analysts say Korea is prepared to develop its own commercial drones.

Between 2002 and 2011, the government put a total of 101 billion won ($97 million) into researching and developing both military and commercial drones at the state-run Korea Aerospace Research Institute (KARI). But since 2011, there has been no progress in developing drone technology.

The technology was customized for military drones, but one research team member said it could be easily applied to commercial drones.

“Korean drone technology ranks seventh in the entire world,” said Gong Hyun-chul, a research fellow at KARI. “After completing technology for military use, we started R&D process to adapt it for civilian drones in 2011 along with the Ministry of Trade, Industry and Energy to prepare for potential demand from the private sector for commercialization.”

Gong explained that the research institute assumed its technology would be commercialized.

There is demand from inside and outside the country to license the institute’s technology.

Gong said public officials from the United Arab Emirates visited KARI a few months ago to discuss deals to license the technology and use it to monitor crude oil robberies. Locally, KARI is in discussions with various government organizations to adapt its technology to oversee wildfires and investigate chemical spills, which can’t easily be reached by humans.

But Gong said the commercial projects have made no progress after failing feasibility tests conducted by the Ministry of Strategy and Finance in the first half of the year to decide whether or not it would get a new grant. Gong hopes the KARI drones would past the test later this year in order to receive grants for additional research.

In line with the global trend, the Trade Ministry said in June it would start accelerating drone commercialization, though it has not yet outlined any regulations. The ministry will choose regions in Korea where aviation laws can be waived to enable drone tests, which is similar to the U.S. FAA’s current system, which designated six states, including North Dakota, Texas and Virginia, to test the viability of the regulations before finalizing them.

“We started this system in 1999, but drone use so far has been really rare,” said a Land Ministry employee. “That’s why we don’t even have detailed safety guidelines.”

The Land Ministry said last week it will release safety guidelines in the next three months and will create policies to encourage drone use by the end of the year, and will choose testing regions next year.

Not suitable for Korea

Theoretically, the technology is ready, but casual drone users say it is unreliable.

Cho, the drone photographer, said he has heard of several drone accidents in Korea. Some local TV stations and newspapers use imported drones that have crashed. He said the crashes were due to GPS deficiencies.

According to a NIPA report, Korea’s drone technology isn’t ready to be commercialized because the drones don’t have protection from hacks on their control system. The report also argued that the government should wait until new drone regulations are settled before advocating for widespread drone use because of the possibility of crashes.

Beyond that, there is a near consensus among Koreans that drones are not appropriate for the country.

A manager at one of the nation’s largest shippers recognized the efficiency that a shipping drone could bring to the company, but said he was worried about national security policies.

“I’m looking forward to seeing advanced technology influencing the shipping industry,” he said. “To be honest, for Korea, it will be a story for the distant future. Even if we have a state-issued license, our drones could be mistaken as North Korean and will soon be shot down by military and police.

“Also, we don’t think we need drones in Korea, because it is such a small country with high population density, particularly in metropolitan areas. In places like Australia and Canada, it will be useful because houses are located so far away from each other, but not Korea,” the manager added.