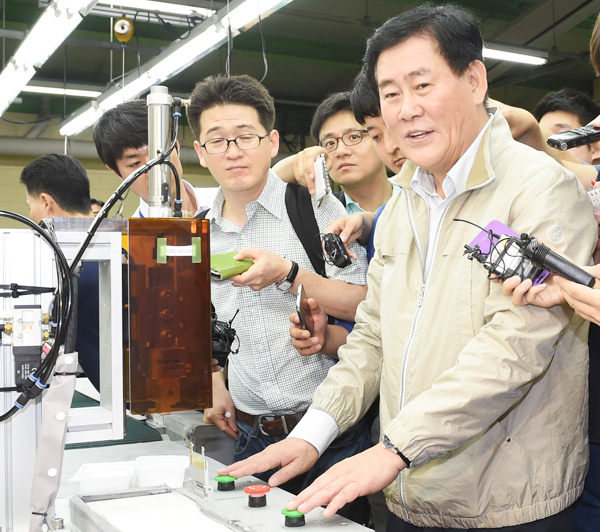 Deputy Prime Minister and Finance Minister Choi Kyung-hwan was elected three times from his hometown in Gyeongsan, North Gyeongsang. The economics major started his career as an economic bureaucrat and worked as a journalist. The former floor leader of the ruling party is skilled in politics, economic knowledge and communication. Plus, he is a close ally of President Park Geun-hye. We have a strong cabinet leader for a change.

He made a splash and stole the limelight since taking office three weeks ago. He appeared to have prepared for the job for some time. After hinting he would take us into uncharted territory in economic policy, he proceeded to do just that at a dizzying pace. Within weeks, he announced a new set of economic stimuli and acted on it before anyone could complain and protest. He lifted restrictions on mortgage loans and pushed ahead with tax code revisions designed to induce corporate and consumer spending by increasing household income. Despite concerns about side effects, many people and markets are relieved to see an action-first leader in the government. His promise to revive the economy helped the ruling party secure a sweeping victory in the July 30 by-elections.

Nonetheless, politicians from both the right and left are critical of their former floor colleague. They point out a macroeconomic-focused recovery is mostly debt-financed and criticize Choi’s path as lacking in long-term solutions to fundamental problems stemming from a heavily unbalanced economy. Taxing hoarded corporate cash is a populist move that could shake the foundation of the market economy, they warn. Instead of forcing companies with the threat of taxation, authorities should try to build a more corporate-friendly environment, they say. But Choi paid little heed and took it all in his fast and long stride. Before opponents could mount criticism, he was on to the next move - deregulation and liberalization in the service sector. He navigated as if he was well-versed in the political climate and its challenges.

Such decisiveness and confidence are demanded of a captain taking us into uncharted waters. As dithering won’t take us anywhere, we might as well venture on. The Korean economy has been caught in a whirlpool of complications. It needs all possible means to pull itself out if it does not want to sink. Still, thorough and farsighted tactics are necessary.

Fiscal and monetary actions have been launched. That must be only the beginning. The economic team must be ready for a fierce and weary battle for longer-lasting restructuring reforms before the stimuli effect fades. The real fight begins now. Choi’s path could end up devastating state and household finances. Inflated stock and real estate prices could crash. The government cannot afford to back out now and lose this battle.

Restructuring is a crusade to overturn the fundamentals of the economy to reboot growth potential. The service sector - primarily in the areas of value-added tourism, medicine, education, finance and culture - must be enlarged to be more balanced with the outsized manufacturing sector. This is how jobs and household income could increase. Weak and non-performing companies must be filtered out and labor needs to be flexible. Various regulations and red tape must be removed to pave the way for a larger playing field.

We have been on this path before. Deregulation and restructuring have been called out and attempted since the early 2000s, but it was never successful due to hindrance and opposition from various interest groups. The elite and mainstream have long benefited from current protective regulations. They have the money and power. They can move politicians, bureaucrats and civilian groups. Social gulfs are widening as the fruits of growth have become scarce.

This time must be different. There must be no backtracking. The commander has the confidence from his troop and support from the public. He must not waver, and persuade opponents along the way. He must use his political connections to win bipartisan support for reform bills. He must have faith in his bureaucratic army, urging them to make amends for their pride and tarnished reputation from a string of collusion and corruption scandals.

The next general election is 20 months away. His constituency will likely bid him back. He may be tempted to answer a political calling. But restructuring reforms cannot be finished in less than two years. He must not abandon his ship when it is halfway into its journey. He must stay at the helm until the ship can safely arrive at its destination. We hope he will emulate national hero Yi Sun-sin, who has been revived in the recent box-office hit “Roaring Currents,” in which he defeated a fleet of hundreds of Japanese ships with just 12 of his own by rallying his soldiers and people with the cry, “You will live if you fight to die.”

* The author is the head of the Economist, a weekly business news magazine published by the JoongAng Ilbo, and the Korean edition of Forbes.