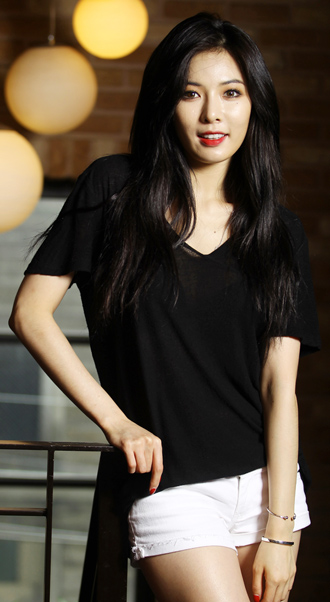 Whether performing solo, as part of the duo Trouble Maker or in her group 4Minute, everything Hyun-A does screams sexy. It might not be an exaggeration to say that she looks sexy even when she’s just breathing.

It seems like the singer, who debuted at 15 as part of the Wonder Girls, doesn’t feel awkward accentuating that image.

But one could wonder whether the public’s fervor for Hyun-A has forced the young singer to stress a side of herself she may have never wanted to emphasize.

To get to the bottom of this, Ilgan Sports, an affiliate of the Korea JoongAng Daily, asked the star whether she feels her sexy image is a liability.

“Why does it have to be a burden? It is just about being responsible,” she said, proving she is a professional singer who can take on a certain look.

Q. When do you think you are the sexiest?

A. I think it’s when I’m focused at work. In fact, being sexy for me is like a cover-up. I’m not at all sexy when I’m just being myself, so I sometimes feel embarrassed when I’m fully covered in make-up and have nice hair.

Does that mean that sexy for you is just a coordinated concept?

Do you ever look in the mirror without makeup and think you look sexy?

Never. I look rather plain. I think I look the prettiest when I’m wearing makeup. That gives me more confidence, so sometimes I worry if my makeup artist can’t come to work.

What is the biggest misunderstanding the public has about you?

People think that I’m [a cold person]. But I realized I don’t need to explain myself, because explaining things in my own words wouldn’t really show my true self.

For the first time, I’m saying yes to being part of a reality program just so that I can show myself in a natural setting.

Are you dating right now?

I’m not really interested; I like working right now. If I met anyone nice I would, but it’s hard to date because I’m a public figure and there’s no one making a move on me. I think that’s largely because I look very strong on stage.

I now understand that it is greedy of me to expect the public to think of me as cute and pure when I [show a different persona] on stage.

You wouldn’t really go public even if you were to date, right?

These days idol stars mostly think that they would go public if they were photographed. I think [I would do the same].

Has it been difficult for you because you started working when you were young?

There are times when it was mentally difficult. I was just too busy, releasing nine new songs in one year after I released “Bubble Pop.” I barely had time to feel that I was getting tired; I couldn’t even figure out what I did best.

I was also worrying if I was doing things right.

When I was 20 years old, I wanted to be an energetic, trendy and unique person. But three years later, I think it’s better to just show development each time I release an album, rather than have a very detailed long-term plan.

Do you have a goal outside of your career?

I just like myself being on and off stage, but I’m strongly motivated that I won’t let any of the people I work with down. I want to do things better in the future than now.

When do you think you can be a singer until?

Until the day I get sick and unable to perform on stage. Speaking more practically, until the day the public wants me.

Have you ever regretted becoming a singer?

What is your standard for success?

Not money, not dignity. My dad told me when I was young that I exist because there are people around me [supporting me].

I’ll know whether I have succeeded or not when I see how many people remain around me.