Woods watch is over: He’s going to play in the PGA

Woods watch is over: He’s going to play in the PGA 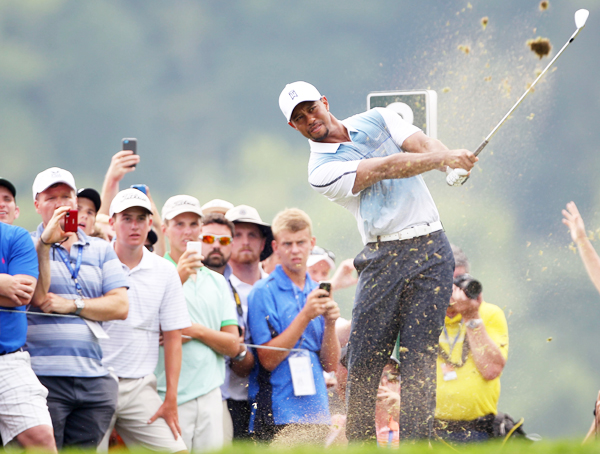 PGA golfer Tiger Woods tees off with an iron on the eighth hole during practice for the 2014 PGA Championship at Valhalla Golf Club on Wednesday. [USA TODAY/NEWS1]

The waiting game has ended, with Tiger Woods pronouncing himself pain-free and ready to compete in this week’s PGA Championship at Valhalla Golf Club after playing nine holes in practice on Wednesday afternoon.

His fitness for the year’s final major had been in doubt after he was forced to withdraw midway through the final round of the WGC-Bridgestone Invitational in Ohio on Sunday.

However, Woods said the problem was resolved when his sacrum (a bone at the base of the spine), which had popped out after he landed awkwardly in a bunker at Firestone Country Club, was put back in by his physiotherapist.

“My sacrum went out, it pinched the nerve and hence the spasms,” Woods told a group of reporters behind the clubhouse at Valhalla before he set off to walk the back nine.

“Once the bone was put back in, it was all good. The spasms went away and I started to get some range of motion. I’m not in any pain. That is the good part.”

The 14-time major winner, who has dealt with a string of injuries during his career and had surgery in late March to treat a pinched nerve in his back, had delayed his decision on whether or not to compete while receiving medical treatment.

Woods and his caddie, Joe LaCava, arrived at the Valhalla clubhouse car park where a throng of photographers and television cameramen were waiting, one of them calling out: “Tiger, how’s the back?” to be met with no response.

Wearing sunglasses and sporting a goatee, Woods got out of the car and changed his shoes before heading off to the practice range where he was joined by his swing coach, Sean Foley.

He showed no sign of any discomfort as he warmed up before he set off, in front of huge galleries, to play the front nine in the company of fellow Americans Steve Stricker, Davis Love III and Harris English.

Asked to assess the quality of his game during practice, Woods replied: “I felt pretty good about how I played and the shots I hit. I need to get more of a feel for how this golf course is playing.”

Woods exited the Bridgestone Invitational at Firestone in obvious pain after hitting his drive on the ninth hole of the final round. He said he had been enduring back spasms since the second hole.

The American had been competing in only his third PGA Tour event since being sidelined for three months after having back surgery, causing him to miss both the Masters in April and the U.S. Open in June.

Woods, who has been stuck on 14 major titles since winning the 2008 U.S. Open in a playoff, has played just seven tournaments worldwide this season with his best result a tie for 25th at the WGC-Cadillac Championship.

He has withdrawn twice from his six PGA Tour starts and missed the cut in one other.

Prior to the Bridgestone Invitational, the 38-year-old finished 69th at the British Open after closing with a 75 for a six-over-par total of 294.

His appearance at Valhalla on Wednesday afternoon was the latest he has ever arrived before the start of a major championship, but U.S. Ryder Cup captain Tom Watson said he was “encouraged” by the former world number one’s presence.

“He [Woods] said to me he really wants to make the [U.S.] team in the worst way,” Watson told reporters at Valhalla. “This Ryder Cup is a big thing.

“It’s a big, big, big event, and these players really want to make the team and bring that Cup back to the United States.”

Woods would need to prove to Watson that he is fit enough to be given one of the three wildcard captain’s picks for the Sept. 26-28 Ryder Cup against Europe at Gleneagles in Scotland.

“Just play well,” Woods said of his goal this week at Valhalla with the Ryder Cup in mind. “That’s the only thing I can control. Try to go out there and win this event. That’s all I’m focused on.”

Woods is scheduled to tee off in Thursday’s opening round at Valhalla along with former winners Phil Mickelson and Padraig Harrington.