Conscripts clamor to be in Katusa

Conscripts clamor to be in Katusa 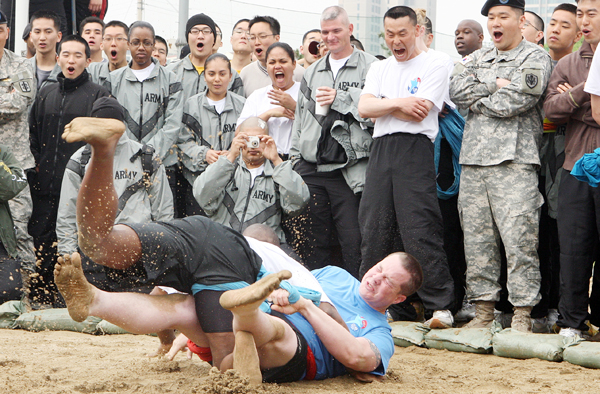 You can make multiple tries for college admission, and you can run for a seat in the National Assembly over and over again. But applying for a position in the Korean Augmentation to the United States Army is a one-time deal, and there is no second chance or consolidation match.

Every year, 2,000 qualified draftees are selected to serve in Katusa. The candidates must be at least middle-school graduates with a Toeic score of more than 780 or a Toefl IBT score of more than 83. Applications are accepted in mid-September, and the selection takes place in November through a computer lottery. In the last four years, the average competition was 7.4 to 1. About 15,000 people apply every year, and 13,000 are not recruited.

My nephew is a college student, and he is enrolled in a “Katusa prep” class. While his Toeic score meets the requirements, he continues to take the test to improve it. While the Military Manpower Administration explains that getting a higher score does not mean a better chance of selection, applicants still try their best. They also hope that they may get a better administrative or computer-related position with a higher English test score.

Being selected to serve as a Katusa is a great gift to the applicant’s family. Relatives and girlfriends welcome the fact that these soldiers get to return home more often. Divisions have different rules, but Katusa members stay outside their military accommodation at least one weekend out of three. The facilities and meals are also usually far better than in regular ROK units. Becoming a Katusa is nearly a dream come true as the soldiers don’t get harassed or disciplined harshly by their seniors. In the past, Korean soldiers had a culture of discipline amongst themselves, but this changed when they learned that the U.S. soldiers found it uncivilized.

When I was in college in the 1980s, when the anti-American movement prevailed, my Katusa friends were derided as “mercenaries for America” and didn’t wear their uniforms to school. Half of them were selected through a test, and the other half were randomly picked from the training center. Those who were chosen regardless of their will didn’t deserve criticism.

Nowadays, Katusa soldiers are envied for being lucky and proficient in English. They are described as the symbol of the Korea-U.S. alliance. Thanks to the Katusa system, the Korean government could save 400 billion won ($385.2 million) in Korea-U.S. defense expense negotiations.

According to National Assembly data, 23 percent of soldiers serving as Katusa in the last five years are educated at Seoul National University, Yonsei University or Korea University while 40 percent are residents of Seoul. The system is therefore criticized for creating a polarization in the military service.

With the death of Private Yun, competition for a place in the Katusa will be even fiercer. It is reminiscent of the young men of Joseon lining up to serve for Ming generals stationed in Korea. But who can blame them for trying to avoid serving in a military unit where you could die from being bullied? Admiral Yi Sun-sin must be turning in his grave.

The author is a deputy editor

of the JoongAng Sunday.