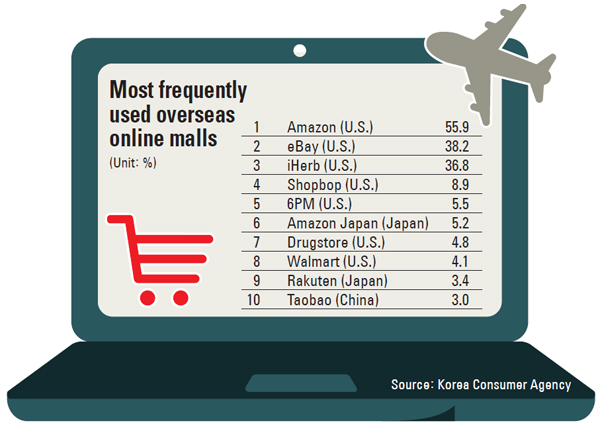 A new study reveals that Koreans are more apt to buy from marketplace behemoth Amazon as the number of consumers who purchase goods online from overseas grows.

The Korea Consumer Agency (KCA) surveyed 1,000 consumers who have shopped at foreign online malls in the past two years. Results showed that 55.9 percent of responders had shopped at Amazon, followed by eBay at 38.2 percent and 36.8 percent had bought health supplements and organic food from iHerb - all of which are American brands. Four more American businesses placed in the top 10, along with two Japanese and one Chinese company.

The survey also ranked customer satisfaction with online malls by measuring product quality and price, diversity, speed and safety of delivery and after-sales service. iHerb placed first in all categories except for diversity of products, which users said was best at Chinese site Taobao.

To take first place, iHerb scored 4.23 for satisfaction and Amazon placed second with 3.70 points. U.S.-based women’s clothing and accessories mall Shopbop, which was the fourth-most popular overall, came in third place for pleasing customers with a score of 3.66. Customer satisfaction with eBay was below its overall performance, placing it seventh.

To ensure that their products would reach them safely, some shoppers chose to use delivery services as middlemen. The survey results showed that Malltail had the highest user rating as a secondary shipper, at 36.2 percent, followed by WeMakePrice Box at 15.8 percent, New York Girlz at 6.5 percent and Iporter at 4.3 percent.

Of those four online malls, customer satisfaction results matched their popularity, with Malltail at the top with a score of 3.5 percent. Consumers reported that Malltail had the best after-sales service, while WeMakePrice Box offered the fastest delivery and Iporter the safest.

The KCA said that it plans to monitor delivery services more closely to ensure the safety of domestic consumers.

“We will continually provide information regarding direct purchases from foreign online markets,” it said.