A view of Lotte World Mall (lower left white building), which will have shopping and cultural facilities in Jamsil, southern Seoul. Standing tall behind the mall is the World Tower, still under construction. By Choi Seung-sik

If you expect to face a huge mess of a shopping center when you walk through the doors of Lotte World Mall in Jamsil, southern Seoul, you may be surprised by how clean and organized it is. The mall, which has not been approved to open yet, is also known as the second Lotte World. It has a huge Avenuel store with a luxury brand department store and duty-free shops on the first floor, with stores for Cartier, Bvlgari and more. Its cinema, which has 21 screens and the world’s largest screen, has digital posters for the recently released “Pirates.”

However, the glossy appearance of the mall betrays the concerns of store owners.

“I don’t understand why we are not able to open our stores when we are 100 meters [328 feet] away from the 123-story tower,” said 45-year-old Byun Jeong-im, who has a 26-square-meter spot for her store on the second floor of the mall. “It’s been months since I finished prepping for my store. Now, these sandals will become overstock when fall comes.”

For Byun, the biggest problem has become managing her other store in Dongdaemun in central Seoul while she tries to organize her Jamsil shop. She had a part-time worker, whom she had been paying 1.3 million won ($1,250) per month since March, but the worker quit last week. “It is easy for fluent Chinese speakers to get a job in a duty-free shop. About 70 to 80 percent of my store’s customers are Chinese, and I’m not sure if I will be able to find a fluent Chinese speaker to work in that store before Chuseok,” Byun said.

But it’s not just store owners like Byun who feel trapped. A 30-year-old, who asked to be identified by her last name Kwon, was hired in March as a manager at a franchise store set to open in Lotte World Mall. Since the branch hasn’t opened, she has been rotating among stores in other areas of the city every week.

“Because I stay at the stores temporarily, I only do chores like cleaning up garbage, even if I am more experienced than the store managers in those stores,” said Kwon, who has five years of management experience.

The construction of Lotte World Mall, which has a total floor area of 80,000 square meters, is the core of their problems. The mall isn’t directly below the 555-meter, 123-story World Tower, but is a separate building with nine to 11 stories.

Lotte completed this “lower portion,” which has 1,000 stores, before asking the city for provisional service approval last June. Provisional service approval means that part of a building has been given permission to operate before construction is finished on another part of the building. The city did not grant permission to the mall, saying that “traffic and safety issues need to be remedied.” 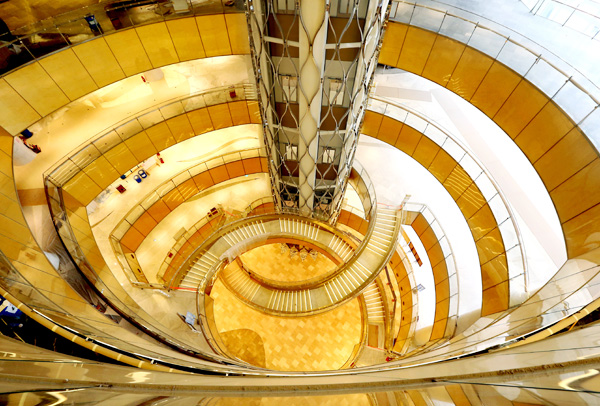 An inside view of the luxury brand department store in Lotte World Mall’s Avenuel in Jamsil, southern Seoul. The spiral staircase connects each floor. By Choi Seung-sik

Some have suggested that the city is hesitant to open such a large facility, twice as big as the Seoul Lotte Town in Jung District, central Seoul, next to a skyscraper that is half-built.

But according to Lotte, the city has maintained that opening Lotte World Mall before finishing the tower’s construction isn’t the problem.

Kim Jong-chun, a Lotte Corporation’s board member said, “There are many precedents for opening the portion that finished construction first, both in Korea and abroad.” Korea’s 284-meter, 55-story International Finance Center Seoul was opened in three separate stages. Sindorim TechnoMart in Guro District, Seoul, was opened up to the 25th floor in 2007 and opened the top 15 floors six months later.

In Taiwan, Taipei 101 opened its five-story shopping mall in 2003 and then opened the 101-story tower a year and a half later. Burj Khalifa, the world’s tallest building (162 floors, 828 meters) in Dubai, Trump International Hotel & Tower in Chicago (92 floors, 415 meters) and the International Commerce Centre in Hong Kong (118 floors, 484 meters) were all opened in four to six stages.

Some anxious store owners are wondering if the delay is due to rumors that the tower will collapse because of sink holes. But Seoul Mayor Park Won-soon said in an interview with the JoongAng Ilbo in July that “experts concluded that there is no structural problem related to sink holes. The tower won’t tilt or collapse.”

“Lotte Tower stands on an enormous concrete base. [The concerns about sink holes] are unrelated, and granting provisional service approval for the lower shopping mall area is also unrelated to sink holes,” he said.

Lotte stressed that “there are six layers of safety measures and [the group installed] 35 kinds of safety facilities in more than 300 spots. Most recently, protection measures have been set up in the plaza in front of the shopping mall, 80 meters away from the tower, just to reassure people.”

A Seoul city official said this month that the issue was actually traffic-related. “The final point of discussion is traffic-related - regarding the plan to construct parts of Olympic-daero as an underground tunnel - and not a safety concern,” the official said.

A Lotte Group insider said that the group was doing its best to negotiate with the city in order to open the mall. Lotte must resubmit its application to the city by Aug. 18.

The merchants said they could not overstate the importance of sales during Chuseok, which falls on Sept. 8. They said that if the mall gets approval from the city, they would do anything possible to open their shops.