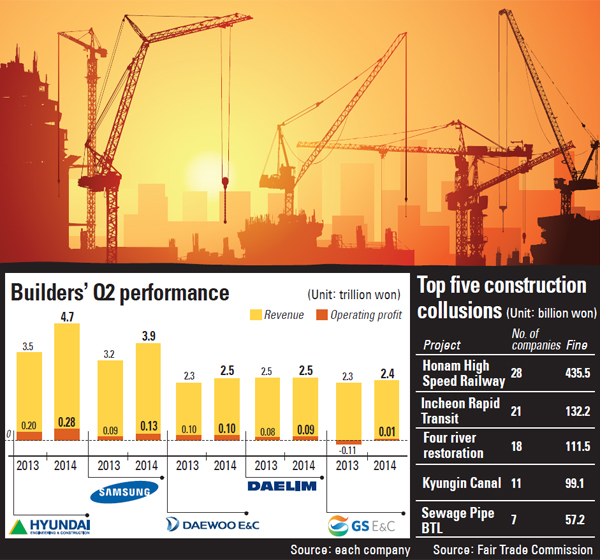 Korea’s major builders turned in a solid performance in the second quarter thanks to overseas projects, welcome news for an industry coping with an image tarnished by a collusion scandal.

Hyundai E&C had revenue of 4.7 trillion won and operating profit of 279.6 billion won, the best quarterly performance in the company’s 67-year history.

Samsung C&T said its construction business sector collected 3.8 trillion won in revenue, up 21.9 percent from a year ago, with operating profit of 130 billion won, up 52 percent.

Daewoo E&C posted operating profit of 103 billion won in the second quarter, down 4.9 percent from last year, but for the first half the company’s operating profit increased 2.2 percent year-on-year to 222.5 billion won. Daelim, which posted a 319.6 billion won loss in the fourth quarter of 2014, also managed to be in the black this year.

The company with the biggest turnaround was GS E&C, which reported an operating profit for the first time in seven quarters. The affiliate of GS Group made 11.1 billion won in the second quarter.

In the fourth quarter last year, three of the top five builders had operating losses ranging from 100 billion won to 500 billion won that “shocked” the local stock market.

Industry insiders attributed the good performance to companies’ efforts to shake off the negativity of last year and the government’s policy to boost the housing market.

After learning firsthand of the risks of foreign projects, they are focusing on profitability.

With Korea’s new economic chief Choi Kyung-hwan acting to revive the housing market by easing regulations for mortgages, analysts predict that the builders’ positive performance is likely to continue.

However, even with rosy expectations for business, local builders face fallout from a corruption scandal that threatens their reputation abroad.

The Fair Trade Commission last week announced that 28 builders, including the top five, were fined 435.5 billion won - the largest penalty ever - for colluding on bids involving the Honam High Speed Railway project.

“Collusion is wrong and we are sorry for that, but it’s unfair that the FTC is exempting those who have liquidity crises and punishing only companies that made profits,” said a spokesman from a local construction company.

However, what’s really concerning the builders is the damage to their image globally at a time when they are relying on overseas projects.

“The credibility of the company is a big factor in overseas projects,” said an official at the International Contractors Association of Korea. “However, in this case, all major builders are involved and I think this is a shame for the entire construction industry.”

According to industry data, the 10 largest builders have collected 28.7 trillion won from overseas projects, which accounts for 60 percent of their total orders, in the first half. For Hyundai E&C, an affiliate of Hyundai Motor Group, more than 80 percent of its orders were from overseas.

Although the heavy reliance on foreign business is a result of each company’s efforts to go global, some companies cite a lack of profitable local projects. Companies guilty of collusion are prohibited from entering government-issued projects depending on their violation level.

Despite the corruption scandal, unrest in Iraq and the Ebola virus epidemic in West Africa, local builders said they are determined to pursue projects overseas.