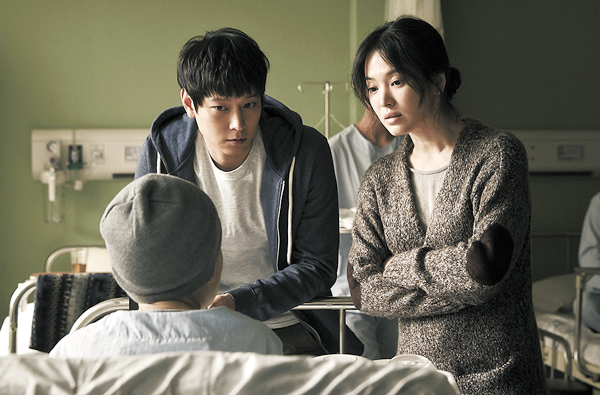 Kang Dong-won and Song Hye-kyo act as parents of a boy with Progeria, a genetic disorder that speeds up the aging process. Provided by CJ Entertainment

As far as A-listers go, it doesn’t get any better than Song hye-kyo and Kang Dong-won. As household names in Korean cinema, both are no strangers to the spotlight.

And so the title of their latest film, “My Brilliant Life,” seems fitting.

That is until you look closer at the poster and see an strange-looking child sandwiched between the two of them. Despite how it may seem on the surface, Song and Kang’s latest collaboration is a tragic tale of a teenager with Progeria - a genetic disorder that speeds up the aging process.

In this Korean take on “Benjamin Button” and “Jack,” Song and Kang play the parents of a 16-year-old boy named Ar-eum. The knowledge that they will outlive their son, coupled with the fact that they had him when they were just 17, makes this family an exceptionally peculiar one.

At a press conference on Monday, the two leads - neither of them yet parents - said that they found more similarities with their on-screen personas than they first imagined, despite being single.

“Of course the fact that motherhood is something I haven’t experienced was a crucial factor,” said Song. “A lot of people probably wondered if I could pull it off, but Mi-ra is actually close to my age, so I could relate to her on that level.”

Playing another unlikely parent is Kang Dong-won as a clueless father. Although not yet a dad in real life, Kang said that playing Dae-su, a teenage taekwondo enthusiast whose dream was cut short by fatherhood, wasn’t difficult to master.

“He’s a character like no other I’ve played,” said Kang who added that Dae-su is more similar to his own personality than any of the other roles he’s tackled.

“At first I didn’t think it’d be a problem, but then while working on it I realized it was harder than I first thought,” said Kang, explaining that while he knew a lot about being a son, he didn’t know much about being a father.

Both stars admitted that they fell in love with the film as soon as they read the script.

“When I first read the script I was so sad,” said Song. “Even in happy scenes I’d be crying, and that’s when I realized it’d be hard to pull off.”

For Kang it wasn’t so much the tears as the way the story was communicated.

“I liked the way it was expressed, how it was depicted,” said Kang. “There was nothing I couldn’t really relate to.”

While the young star who plays the son has not yet been revealed, director Lee Jae-yong said that in terms of makeup, the film could stand its ground against Hollywood flicks. With the help of special makeup effects artist Greg Cannom, who has worked on hits like “Titanic,” “Benjamin Button” and “The Mask,” the crew turned the teenager into an 80-year-old man in a process that took five hours a day.

“While worrying about the costume makeup and researching nationwide, we decided we needed something more advanced,” said Lee.

After sending a letter to Cannom, the crew flew to Hollywood to learn his trade.

The filmmaker said he was also nervous at the prospect of opening a movie featuring some of the most lustrous actors in town.

“It’s been awhile since I worked on a film with a mainstream script,” he said, adding that he had no doubt Song and Kang would flourish in their challenging roles.