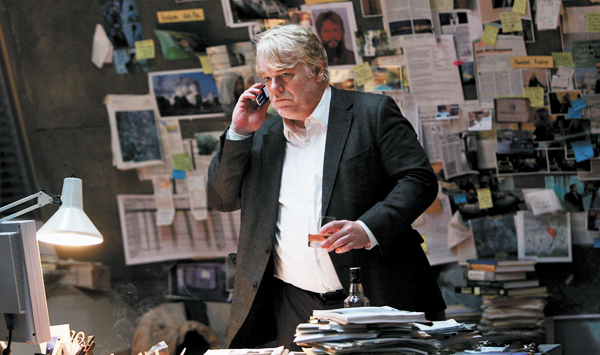 In one of his final films, “A Most Wanted Man,” Phillip Seymour Hoffman plays a German anti-terror agent who has some tough calls to make when he comes across a Chechen-Russian refugee. Provided by Invent D

Maybe it’s because it was one of his last films, but an overpowering melancholia pervades Phillip Seymour Hoffman’s “A Most Wanted Man.”

Of course, the subject matters are not exactly light: The film focuses on terrorism and the plight of illegal immigrants in a developed country.

It also doesn’t help that the weather in Hamburg, as depicted in the film, is always on the dark and dreary side.

From the opening sequence where the lives of working-class Muslims in Germany are portrayed in a less than enviable light - complete with a no-frills prayer room in a dank basement where they spend their leisure hours - it’s clear that the film isn’t about the finer things in life.

Hoffman plays the very serious Gunter Bachmann, an informant of the German government’s uber secretive antiterrorism department. Having botched his prior assignment, Bachmann needs to get back into his superiors’ good graces, so much so that he’s almost obsessed.

Equally absorbed with her job is Annabel Richter, a human rights lawyer played by Rachel McAdams with an impressive German accent.

The worlds of Bachmann and Richter collide when Issa Karpov (Grigoriy Dobrygin), a Chechen Muslism, arrives in the country. Having been tortured by Russians and held captive in Turkey until his escape, there is no semblance of hope to be found in Karpov’s eyes.

As soon as he gets to Germany, Karpov finds that he has been left quite an inheritance by his father, who had some dealings with terrorists.

Adamant that he doesn’t want to inherit his late father’s “dirty money,” it isn’t long before he is entangled in a web of conspiracy and espionage.

Bachmann (Hoffman), who watches Karpov from afar, finds a way to use the money to better his, Richter and Karpov’s positions.

Bachmann asks Richter to persuade Karpov to donate his inheritance to a Muslim philanthropist whom Bachmann suspects is supporting terrorists.

Befitting of a film set in Germany, everyone is focused on their work. There is also an underlying anger toward family, which manifests itself in the unusual decisions these characters make. In-depth explanations are not given, which makes it difficult to relate to any of the protagonists.

Despite being the central character, Karpov always seems removed from the drama and consistently shows a sense of aloofness.

In fact, it’s hard to work out what kind of emotions he should be stirring up in the film’s viewers.

In a plot that unfolds like a day at an immigration department, not one character stands out over another, and there is a sense that these people are mere puppets being pulled this way and that in a situation that is way above their heads.

The part that comes closest to evoking human feelings comes in the final scene when you see a very flustered Hoffman screaming out on a near-deserted street.

Although the boiling point that finally tips Hoffman is intense, it does take an awfully long time to get there, and once it’s over it isn’t long before the credits roll.

It’s also a pity that the lives of average folks are never shown even as the film tries to emphasise the perks of living in a developed world.

Although the frustration of being an illegal immigrant is explored in depth, there just aren’t enough furtive glimpses into Richter’s or Bachmann’s lives for the viewers to feel much for either of them.

But even so, the film asks a clear question: How many lives must be nipped in the bud for the safety of others? The answer is a quiet one, if the ending could be called an answer.

Yet one thing is for certain. When it’s all over, all the viewer is left with is a sigh of relief that the job is at last done and that now everyone can get back to the lives they had before Karpov entered the scene.