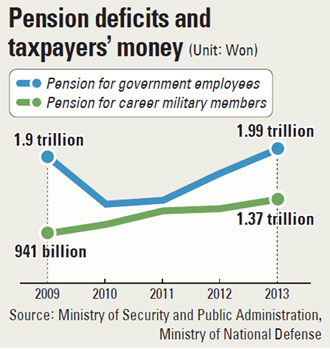 The Park Geun-hye administration is gearing up to reduce deficits in the pension system for public employees and members of the military, taking advantage of a two-year political window before the next elections.

Overhauling the two pension systems will be a key issue in the talks, the JoongAng Ilbo reported yesterday, citing the senior lawmaker.

The forum is the highest-level meeting led by the ruling party with participation by senior Blue House members and government officials, as well as Saenuri Chairman Kim Moo-sung and the party’s lawmakers.

The party official said it was the Blue House that first asked the ruling Saenuri Party to come up with a proposal to fix the pension plans, deeply rooted in the red, on the back of the ruling party’s landslide victory in July 30 by-elections.

“[The Blue House] requested the party to lead the way in proposing strong reform measures amid high public demand for social overhauls with the absence of major elections for the next two years,” the official said.

Negative public sentiment toward the military in the aftermath of the death in April of a young Army conscript, who died after weeks of brutal abuse, has also enforced the calls to rein in the military pension system.

Calls to overhaul the current pension schemes for public sector workers and career soldiers have been voiced over the past few years because the extent of the deficits for the two programs are so wide.

Overly generous pension benefits for government employees and soldiers is cited as the main reason for such high deficits.

Previous administrations all promised to fix the debt-riddled plans, but their efforts ended with no tangible results largely because of fears over potential fallout in the elections.

The fact that there is no major vote for the next two years gives the government and the ruling party much-needed political space to finally carry out what has been considered a necessary reform measure.

Last year alone, the government injected 1.99 trillion won ($1.91 billion) of taxpayers’ money to keep running what many see as hefty pension premiums for government workers. For the military pension, 1.37 trillion won was spent on keeping it afloat.

Making things worse, the pension scheme for government workers has accumulated 12.2 trillion in debt as of last year.

While the need for reform is rather clear, it remains to be seen whether the current government could pull it off given the expected strong opposition to the changes, in what many see are overly generous pension benefits to public workers.

Pension plan reform for public workers was championed by every past government, but was met with fierce opposition by the government workers’ union each time.

“Reforming the pension system [for government workers] is a challenging task because the interests of so many people are at stake,” said Yoon Suk-myung, a researcher at the state-run Korea Institute for Health and Social Affairs.

“The process through which pension payments are set for each beneficiary should be disclosed and done in a transparent way, and an expert independent from outside interference must be given absolute authority in carrying out sweeping reform.”

He added that the willingness of a state leader to push through reforms that would likely be unpopular among those affected was “very important.”

“The resolution of a leader plays a key role [in realizing reforms],” Yoon added.

Due to the high stakes involved and the potential conflict of interest, a senior Saenuri member involved in the reform task made it clear that the party would not appoint government officials on a reform committee to rein in the pension plans.