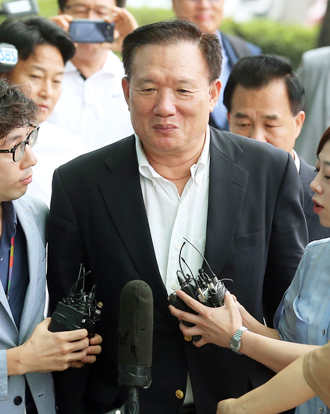 A ruling party lawmaker was summoned for questioning yesterday over suspicions that he had accepted bribes and extorted part of his secretary’s salary. He is also alleged to have had a corrupt link to the shipping industry.

Saenuri Party Representative Park Sang-eun appeared at the Incheon District Prosecutors’ Office at around 8:40 a.m. yesterday. He was accompanied by his legal representative Kim Seong-il. He did not respond to reporters’ questions as he walked into the prosecutors’ office.

About 40 of Park’s supporters also showed up at the site, chanting and cheering. Prosecutors are investigating more than 10 charges, with some of the allegations brought forth by his driver and former secretary.

The bribery allegation for Park emerged after his chauffeur found a bag stuffed with 30 million won ($28,950) in the lawmaker’s car and reported it to the prosecution in June, claiming that the money might be illegal political funds. Park earlier stated that the money was supposed to be used for legal fees.

However, the lawmaker faced additional accusations after prosecutors found 600 million won in cash in his son’s house during a June raid.

The authorities believe that the cash is just part of the illegal funds Park had amassed. The Saenuri parliamentarian has argued that it was a retirement bonus offered by a company where he had previously worked, along with donations from book publishing ceremonies.

One of Park’s former secretaries also revealed that the lawmaker had forced him to donate half of his monthly salary to Park’s office.

Jang Gwang-hoon has publicly accused Park in interviews with various local media outlets. The embattled lawmaker defended himself, however, saying Jang’s contributions had been voluntary. He further added that he had become a scapegoat among certain political forces with bad intentions.

Prosecutors are also looking into whether Park’s legislative activity has any relation to his ties with a shipping classification organization.

Separately, the prosecution yesterday requested a pre-trial detention warrant for a ruling party lawmaker over allegations that he had received bribes from a local railway builder in exchange for awarding orders.