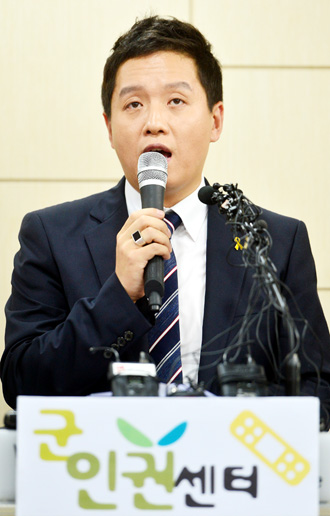 Lim Tae-hun, head of the Center for Military Human Rights, holds a briefing at the center in western Seoul yesterday. [NEWSIS]

The death in April of a young Army conscript who allegedly suffered constant physical abuse by his fellow soldiers was directly caused by a particularly brutal assault incident by his peers, a human rights official said yesterday, urging the military to charge the suspects with murder.

According to Lim Tae-hun, the head of the Center for Military Human Rights, the 23-year-old private, surnamed Yun, died not from choking, as previously stated, but because he lost consciousness after being severely beaten.

Lim also claimed that Yun, who served in the Army’s 28th Infantry Division, was already dead by the time he arrived at the hospital that day, not a day later as reported.

The activist demanded in a press conference yesterday that the military prosecution commanding the case add murder to the charges handed to the six suspects involved.

He also revealed additional information from the military reports he obtained on Yun’s death, which the Army did not make public. Yun’s abrupt death in April, which was not revealed until July 31 by Lim’s organization, has placed the Korean Army at the center of controversy and raised questions about military culture as well as how well the organization has handled human rights issues regarding its soldiers.

According to the military prosecution, on April 6, Yun suddenly collapsed on the floor, involuntarily urinating. Witnesses said he had been eating before he was hit by fellow soldiers. The prosecution concluded that the cause of death was asphyxiation caused by a blocked airway.

Lim said that there were no signs, however, that Yun had choked, such as a change in his complexion.

“After he was beaten several times on his head by a sergeant, surnamed Lee, he abruptly told them that he needed a drink of water,” Lim said. “He was heading to get water when he suddenly collapsed and [involuntarily] started urinating, and then lost consciousness.

“This is a typical symptom of a concussion,” he added. “His unconsciousness was most likely caused by the assault by the suspects, before his heart stopped beating.”

The activist also alleged that the Army had attempted to cover up the case. He said when Yun was transferred to a military hospital, an Army surgeon asked a senior military official if the victim had suffered any physical violence, to which the senior official responded, “No.” The official’s identity was not confirmed.