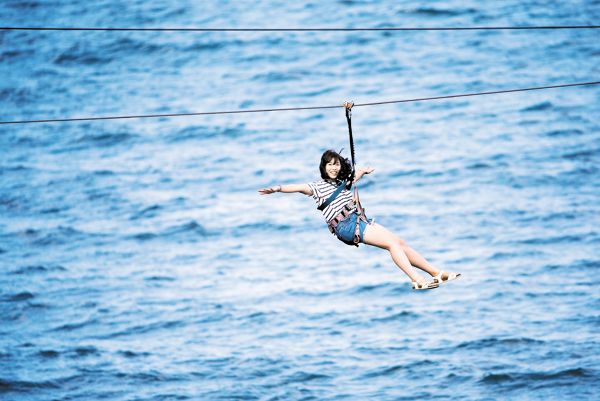 You can fly over the sea by riding a zip line in Gangneung, Gangwon. The aerial runway is installed between Gangneung Port and Namhangjin Beach and enables people to travel 300 meters (984 feet) in 45 seconds. By Ahn Sung-sik

When the streets of Seoul become less crowded and the roads have fewer honking vehicles, it’s a sign that the summer holiday season has started. 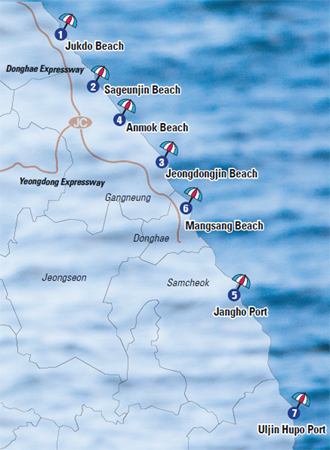 With the official getaway period beginning, the most basic yet important question that lingers is always the same: Is it better to vacation at the beach or in the mountains?

If you’re still undecided, the JoongAng Ilbo highly recommends heading to the seaside, especially to the beaches off the east coast.

The East Sea area is one of the most familiar holiday destinations in Korea for several reasons.

First, it is reasonably accessible from central Seoul by car. If you choose the right time to depart during peak season, it takes less than four hours to get there from the nation’s capital. Plus, the ocean is shallower and much clearer than the West Sea.

But there are more reasons for choosing to visit the East Sea than accessibility and water quality. We sacrifice a significant part of our hard-earned vacation time driving for hours on congested highways and tend to dream of doing more than just soak in saltwater.

In recent years, many activities have popped up around East Sea vacation spots compared to in the past. You can now surf at one of several wave-filled beaches, fly over the ocean in a zip line, or just settle down at one of the cozy cafes dotted along the coast.

If you haven’t made up your mind about where to go for your summer vacation yet, head to explore the east coast this season to partake in one of several things to do. 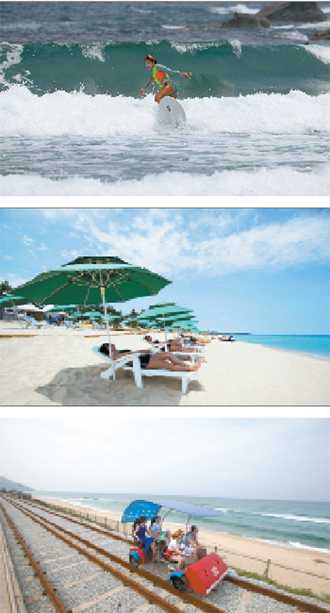 Even if you’re not into riding waves, you’ll love Jukdo Beach, which has a distinct surf culture.

Jukdo has been known as a spot for enthusiastic surfers for years because of its steady waves.

But this beach is less famous compared to others better known for surfing, such as Jungmun Beach on Jeju Island and Songjeong Beach in Busan.

As a result, it’s less crowded while the trees that surround the beach add a more secluded atmosphere.

According to professional surfers, fall and winter are the best time of the year to surf on the east coast, but summer is better for beginners because the waves are weaker.

About 10 or so surf shops have opened up one after another along the beach. Gear is available to rent from many of the stores, including Sea Man, which also provides one-day lessons for beginners.

If you want to learn the basics of surfing, however, a lesson is priced at 60,000 won, including rental fees.

Soaking up the sun

A section of Sageunjin Beach was designated as dog-friendly last year for pet owners who want to vacation with their four-legged friends. It instantly became a hit.

This year, the same stretch of sand has been replaced with a so-called bikini beach, with facilities catering to people who want to sunbathe.

A wall that’s about the height of an average man has been installed to separate the bikini beach from the regular beach.

Since the area is only open to sunbathers, people are able to catch some rays without worrying about being stared at by others.

Although the area is designated as a bikini beach, people who want to wear ordinary swimsuits are also welcome.

There is no admission fee, but sunbeds, wooden tables and parasols cost 10,000 won each.

Pedaling along the coast

Jeongdongjin Beach has long been known as a spot to watch the sunrise, but the beach recently added an attraction - a rail bike.

A rail bike is a vehicle attached to a track that is powered half by pedaling and half by electricity.

Tracks have been installed along Jeongdongjin Beach so that people are able to enjoy being at the seaside while riding on the bikes.

There is one course that travels back and forth between the departure point and a halfway point train cafe.

The round trip measures about five kilometers in total distance and takes about 50 minutes.

Some of the course is slightly uphill but it is an easy ride, especially because the bikes are half electric so you can operate them automatically at some harder points of the track at the flick of a switch.

The rail bikes’ operating hours are usually between 9 a.m. and 5 p.m., but business hours have been expanded to 8 p.m. until Aug. 24.


Fresh-brewed coffee at the beach

Experiencing the sea breeze is one way to enjoy your summer vacation, but there is another way to relax at the beach - by sipping on a latte on a coffee street, which consists of 26 cafes along Anmok Beach.

If you want to drink a cup of coffee against the backdrop of the blue sea, take a seat at any terrace cafe. Almost all the shops here are two-story buildings with outdoor seating.

Among many cafes, Coffee Cupper is one of the first coffee houses nestled near the beach.

Another attraction that’s available at Gangneung is a zip line.

The Aranabi, as the aerial ropeslide is called, is installed between Gangneung Port and Namhangjin Beach.

The zip line’s starting destination is located about 20 meters above sea level.

Once you leave the take-off point, it only takes 45 seconds to cross a distance of around 300 meters (984 feet).


Kayaking with an unusual view

Jangho 1-ri near Jangho Port is the perfect place for city dwellers to experience a day at a fishing village.

The surrounding sea, which is abundant with various types of seafood, is shallow and flanked by huge rocks, while the water’s waves are not too high or harsh.

Since the fishing village has seen a growing number of visitors with children, it brought in kayaks made with transparent-reinforced plastic in 2008 for families to paddle around in.

The see-through boats have become a hit because you can look below at the ocean while rowing around.

Jangho2-ri, a neighboring village of Jangho 1-ri, has also introduced the transparent boats.

Handling the vessel is easy; anyone can operate it without any special instruction.

Two types of kayaks are available: one with two seats and another with four.

Initially opened in 2002, the resort has 83 caravans, 10 camping sites and 59 guesthouses and cottages.

Since the resort is in proximity to Mangsang Beach, those who stay there can fall sleep to the sound of waves.

Along with thick pine trees and close to two kilometers of sandy coastline, another great selling point of the resort is its well-equipped facilities: It has a volleyball court, walking path, cafeteria and rest pavilion.

Securing a spot at the Mangsang resort is always difficult, but the competition has eased somewhat with the recent opening of a second campsite.

Located about 500 meters away from the first resort, the second camping facility has 41 caravans and 93 camping sites.

The camping pitches are currently open to the public, but caravans will be available starting next month.


Fishing with a difference

Geoil-ri, Uljin, is well known for its juicy snow crabs, but the latest addition to the fishing village is an artificially-made angling site that floats on the sea.

Uljin Marine Fishing Park is a government-run project that aims to promote fishing villages in order to attract more visitors.

There are five similar angling sites across the nation, but the one in Uljin is the largest. The man-made fishing spot, which stretches about 470 meters (513 yards), looks like a seawall from afar.

Amateur fishers take up the largest portion of visitors, but ordinary people also take a trip to the marine park because it has a walking path and photo zone.

Entry is free for now, but the park plans to levy a charge soon.

The most common available fish these days in the area is seriola, black sea bream and mackerel.