Cabinet member has a home aide

Cabinet member has a home aide 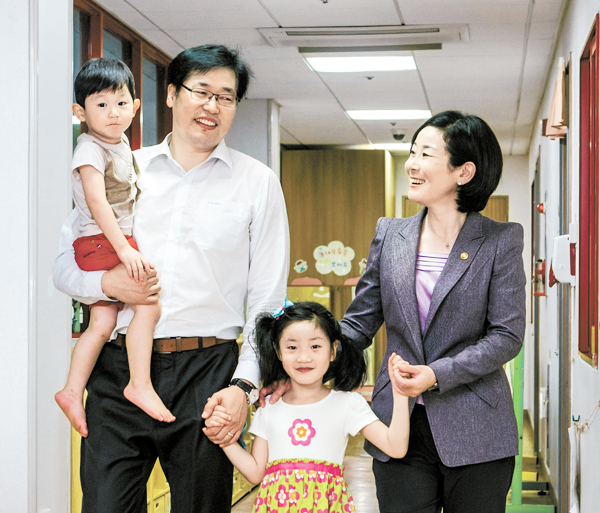 Kim Hee-jung, minister of gender equality and family, is widely remembered for running as a National Assembly lawmaker for her second term in 2012 while she was pregnant.

Kim is also the youngest person ever elected to the Assembly after winning her first election 2004.

She has been married for 10 years to Kwon Ki-seok, who works at LG Electronics.

As the leader of the Gender Equality Ministry, Kim is in charge of helping women break through the glass ceiling in what remains to be a heavily male-dominated society and devising policies to help women balance work and family duties. Kim is also the mother of two children.

When asked by the JoongAng Ilbo how she manages to run the ministry while also raising two children, a 6-year-old daughter and 3-year-old son, the new minister said she depends on her husband to share the household workload.

“We have a working daddy in our house,” said Kim with a smile.

In Korea, it is not easy to find such “working daddies” because the general perception is that women should take care of household activities and are mainly responsible for raising children, while men should concentrate on making ends meet.

For Kwon, that notion is outdated and does not meet the needs of young married couples today.

“I have to go back to my office after feeding my kids dinner,” Kwon, 48, said as he picked up his children from a day-care center run by the National Assembly in Yeouido, western Seoul. “I try to come here before 7 p.m. so they can have dinner at home.”

One of the principles Kim and Kwon uphold is that the responsibility for fetching the two children falls on the partner who gets out of work earlier.

“We have no separation of responsibilities when it comes to household activities. My husband never said he would ‘help’ me do the chores because he thinks he shares that responsibility. I am very thankful for that,” the minister said.

Kwon’s active participation in household work is still something of a rarity in Korean society. Illustrating the larger share of household chores women are faced with at home, a study by the Organization for Economic Cooperation and Development found that Korean men spend about 45 minutes per day on household work, ranking in last place among OECD member countries.

Kwon said it’s not difficult to be open-minded in sharing the burden of household labor. “Men should be flexible in adjusting their schedules to share the burden and find a good balance between work and household chores. For me, it was not a choice to share the burden. I perceive it as something I have to do.”

Kim said the belief of some people that the Gender Equality Ministry exists only for women stems from a misunderstanding.

“The ministry wants both men and women to lead households and share life on an equal basis,” she said.