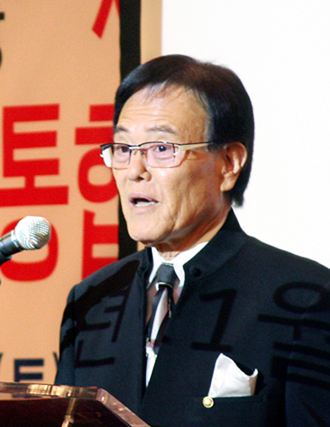 Johnny Yune speaks at an event to mark the launch of the ruling Saenuri Party’s Committee for National Cohesion for overseas Koreans in Los Angeles. [NEWSIS]

“Yune came to the organization’s office in Da-dong, central Seoul, starting Wednesday morning after receiving the appointment from the Ministry of Strategy and Finance,” said Byun Choo-suk, CEO of the KTO.

Yune, 77, has maintained a close relationship with the Blue House.

In 2012, Yune was in charge of President Park Geun-hye’s overseas campaign teams during the primary and December elections.

He also is close to Lee Nam-ki, the former presidential senior secretary for public relations who produced Yune’s television talk show in 1989.

Such personal connections resulted in a rumor that spread throughout the nation’s political circles late last year that Yune had been nominated to succeed Lee Charm as KTO’s CEO.

Another rumor swept the Korean community in Los Angeles in January 2013, even before Lee’s resignation, that Yune was being considered as the next CEO, according to a KTO employee.

The standing audit post is appointed by the Blue House and has a term of two years. Depending on his annual performance assessment, he could be reappointed for another year. There is no limitation on the number of reappointments. His annual salary is about 83 million won ($80,270), the second highest in the organization after the CEO.

Born in October 1936 in Eumseong County, North Chungcheong, Yune immigrated to the United States in 1959 and began his entertainment career there by appearing on various TV shows.

Yune also hosted talk shows on Korean broadcasters KBS and SBS from 1989 through 1992.

He returned to Korea last year to obtain citizenship. Before coming back, he maintained his entertainment career while managing his interior design business catering to the Korean community in Los Angeles.