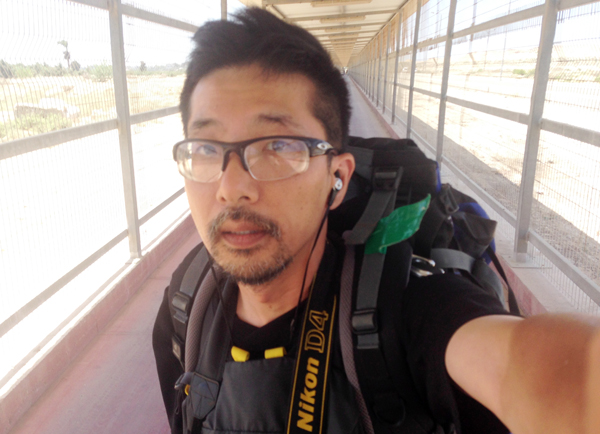 Kim Sang-hoon is the only Korean photographer who has covered the most recent round of armed clashes between Israel and the Palestinian militant group Hamas, which erupted after tensions flared over the kidnapping and murder of three Israeli teenagers in the West Bank and the subsequent suspected revenge killing of a Palestinian boy.

He has served as a photojournalist for the Ministry of National Defense and the Army since 2006. He also works as a freelance photographer and designer for various agencies.

Kim started photographing military objects in 1993 when he was majoring in visual design at Seoul National University of Science and Technology. In 2000, he went to attend the Pratt Institute in New York to further his studies, after which he built up his career as a photographer at various press agencies, including the Paris-based Sipa Press. He currently works as a professor in the Visual Communications and Multimedia Design Department at Kangwon National University.

Kim said the Israeli military force prefers to either call the building they are going to bomb in advance and play pre-recorded messages or fire so-called knock-on-the-roof missiles, which are relatively weaker and warn those in the area, on a targeted building to minimize damage.

“But despite the warnings, the [actual attack] could occur only in three minutes or not at all,” he said. “And even if they use weaker weapons as a warning, the shrapnel sometimes kills people.

“When you see [such warnings], it’s really hard to tell whether it is truly a warning, and then you’re nervous for the rest of the day,” he added.

In an interview with the JoongAng Ilbo on Sunday, the day he returned to Korea, Kim admitted that the first thing he did after coming home was to wash his flak jacket, which he affectionately calls “bastard.”

Q. You wear a flak jacket and not a bulletproof vest?

A. If you get a direct shot, you’re dead anyway. I wore a flak jacket, which protects me from fragments, because it is more likely for me to make it. I also put on protective goggles and a plastic helmet.

How is the situation in the Gaza Strip?

I’ve been to several battlefields, but I’ve never experienced missile attacks nearby this frequently. Missile attacks from Israel followed me everywhere I went. One of them was near the hotel where some 20 foreign journalists, including myself, were staying.

There are buildings for the United Nations, international organizations and the Red Cross near the hotel, but they bombed the area anyway.

What was your daily routine?

When I wake up in the morning, I check breaking news from the foreign press and visit bombed areas. I used to go to hospitals and funeral halls as well. As the bombing continued day after day, my daily routine like this was repeated every day.

What kind of pictures did you take?

I think photos can’t fully express the brutality of war no matter how brutal it is. I wanted to deliver the feeling I had in the field because I thought people should know the damage a war may bring. I also take photos of scenes that don’t look like battlefields. There are daily lives, too, and I think those pictures would make those who never experienced war before think about it.

What do the Palestinians think about the conflict?

Most of them do not support Hamas, but they seemed willing to risk a war against Israel to lift the blockade policy.

I heard you’ve been to Israel in the past.

I visited Israel in 2009 to cover the fighting with Palestine. I heard an air-raid siren at a shopping mall in Sderot [Israel] and the entire crowd moved to shelters. I thought they were overreacting, but it was repeated about 10 times a day. It was natural for them to grow hateful of the Palestinians.

Which country do you think is more responsible?

Gaza is too small to avoid bombing. We should let no innocent man be falsely charged even when we let 10 thieves go. But [Israel keeps] attacking to kill Hamas officials knowing that tens of innocent men could be killed. I learned that death in the battlefield is murder.

You also take photos of our military. Is that not contradictory?

In the real world, it is difficult to obtain peace. War breaks out due to a power imbalance, so I think military power is a necessary evil. Photographing our military forces should be done continuously because they can at least show the confrontational situation between the two Koreas.