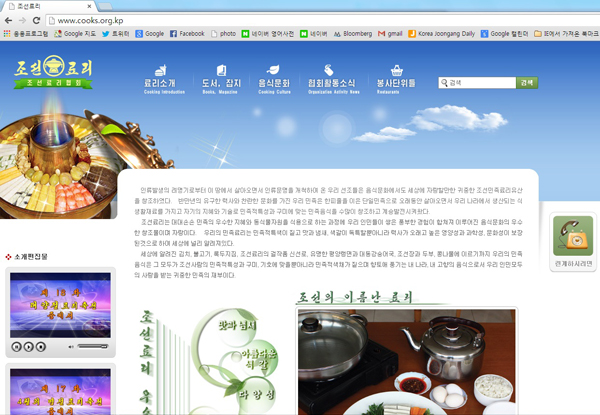 A screen shot of the home page of the North Korean cooking website.

North Korea, one of the most reclusive countries in the world, rarely opens up about itself to the outside world. But there appears to be one new exception: its food and culinary skills. People outside of North Korea now have access to a website run by the Korean Association of Cooks (www.cooks.org.kp), which offers hundreds of recipes, table manners and the origins of its traditional dishes.

Based on the pictures on the website, the scope of North Korea’s food appears to be rich with more than 80 types of rice dishes, though it is very questionable if those foods are actually enjoyed by most North Koreans.

Some of the rice-preparation styles overlap with those of South Korea, while others don’t.

An even more interesting part of the site is the section that introduces North Korea’s food-serving customs.

One of the posts says, “When serving food, women should always keep themselves clean and then prepare food” and “The women should place spoons and plates for the convenience of others.”

“Our people dine in a civilized manner?.?.?.?Younger ones should never put down their spoons and chopsticks until the elderly finish their meals. This is a custom meant to express respect towards the elderly,” it noted.

The exact opening date of the website is unclear, but it has been online since at least late last month.

The Korean Central News Agency first mentioned the cooking website in March 2012 and again in January 2013. But the site was inaccessible from the outside world at those times, if it was actually online at all. The 2012 KCNA report said the “web page deals with common knowledge and theories on a variety of dishes and how to cook them.”

“It also offers such data as the origins of and anecdotes about dishes and global trends in cooking development. It has a distinctive catalog for the convenience of housewives.”

Above the stylized food pictures, the site features video footage that shows food festivals in the North.

The cooking site also has contact information including an address, phone and fax numbers and an email address.