Army prosecutor out of his depth, legal officers say

Army prosecutor out of his depth, legal officers say 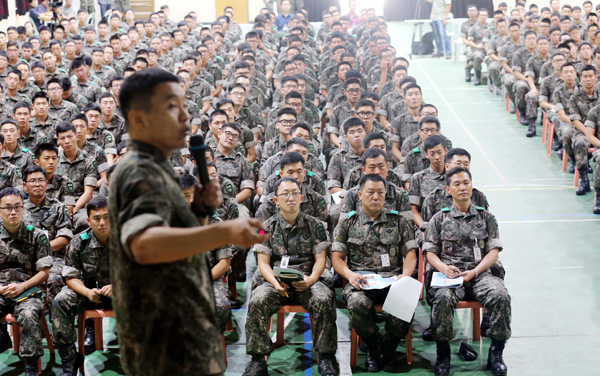 Soldiers of the Army’s 30th Mechanized Infantry Division attend human rights training yesterday. In the wake of a private’s death after he was physically abused by senior soldiers, Defense Minister Han Min-koo instructed all Army units to conduct such sessions. [Joint Press Corps]

A 26-year-old Army lieutenant with nearly no judicial experience was assigned as the senior military prosecutor in charge of the case involving systematic mental and physical abuse of a private assigned to the 28th Infantry Division that led to his death on April 6.

The first lieutenant, whose identity was not revealed, was assigned to the infantry division as a judicial official in March. He completed two years of training at the government’s Judicial Research and Training Institute in January.

The Ministry of National Defense prosecution team said yesterday that it had advised Third Army prosecutors handling Yun’s case to seek homicide charges against the soldiers who abused the private, Yun. They were originally charged only with involuntary manslaughter, but after the details of Yun’s abuse at the hands of fellow soldiers were made public last week, pressure has mounted for more serious charges.

Yun’s assailants should have been charged with murder, several experts said, but because an inexperienced military lawyer oversaw the case, Yun’s death was first accepted as a death because he supposedly choked on food.

“It is astounding how a death due to a group beating could be left to someone with that limited experience,” said one prosecutor, who asked to remain anonymous. “His peers from the his graduating class [at the Judicial Research and Training Institute] handle traffic law and other minor offenses that usually end with a fine. In Army terms, it’s like a commissioned second lieutenant who had just graduated from the military academy leading a division into war.”

The Center for Military Human Rights claimed earlier this week that Yun’s death was directly due to bodily damage from the beating and negligence afterward, rather than asphyxiation caused by a blow to the chest while eating, as the 28th Infantry Division prosecution concluded. An attorney who once served as a military judicial official agreed.

The attorney added, “The investigation by the military police indicates that [Yun] fell over after a beating. His pulse and oxygen saturation were checked, and then he was beaten again. The assaults came despite a warning from a medic and an awareness of the dangers of continuing to beat him, so this has to be seen as homicide due to willful negligence.”

In regard to the Defense Ministry’s move to belatedly upgrade the charges against Yun’s assailants, a judicial official said, “It is a problem for a superior authority to try to influence the course of a case that is already under investigation. Because the initial investigation was faulty, everything has become botched.”

Ahn Gyu-baek, an opposition lawmaker on the National Assembly’s Defense Committee, said, “Cases that occur in an infantry division in principle are investigated by a judicial official of the division, but murder due to systematic cruel treatment in the barracks is a serious situation and should have been handled at an Army corps command.”

According to one military official, “The first lieutenant assigned to handle the case did not have much legal or military experience and was new to the job, and since only one graduate from law school or the judiciary institute is assigned per division, they can be swayed and not able to oversee the military police very well in the initial stages of an investigation.”