Putting puts Park in lead at the Meijer LPGA Classic

Putting puts Park in lead at the Meijer LPGA Classic 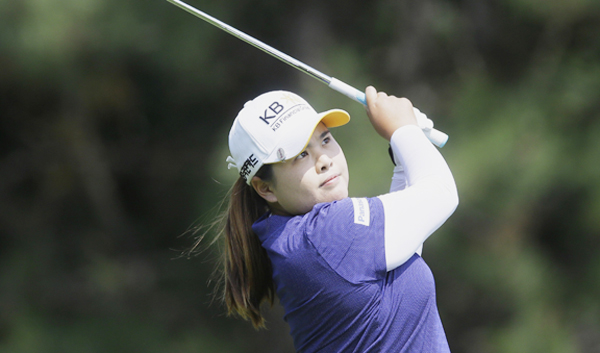 Park In-bee hits off the No. 2 tee in the third round of the Meijer LPGA Classic on Saturday. [AP/NEWSIS]

Park In-bee made two long birdie putts on the back nine Saturday and finished with a 3-under 68 to remain a stroke ahead after the third round of the Meijer LPGA Classic.

The third-ranked player in the world holed a 25-footer from the fringe on the par-3 14th, bogeyed the par-4 15th after missing a 3-foot par try and rebounded with a 35-foot birdie putt on the par-4 16th.

“I feel like I haven’t holed that kind of putt for a long time and it’s all of a sudden happening this week,’’ said Park. “This putter, it seems like it’s going really on line and I feel like I’m stroking the ball better this week.’’

The 26-year-old won six times last season and took the Manulife Financial in June in Canada for her 10th LPGA Tour title. She had a 13-under 200 total at Blythefield Country Club in Belmont, Mich.

“I think it would have been nice if I had probably a two- or three-shot lead,’’ said Park. “That would give me more breathing room, but one is still better than nothing. I’m in better position than everybody else.’’

South Korean rookie Mirim Lee was second after a 67. Norway’s Suzann Pettersen was another stroke back after a 69.

Park, using a blade putter instead of a mallet for the first time since 2008, birdied the first hole and stayed in front until Pettersen birdied Nos. 7 and 8 to tie for the lead. The tie lasted one hole before Park rolled in a 12-foot birdie putt at the ninth.

Pettersen birdied the par-4 13th with a 20-footer to tie again, only to have Park sink a 25-footer from the fringe at 14. Pettersen then matched Park’s bogey at 15, also missing a 3-foot par try.

That’s when Lee slipped in between the two with birdies at 15 and 16.

Pettersen, who for much of last year was No. 2 in the rankings to Park’s No. 1, said she struggled with her game, the gusty wind and greens that are firming up.

Park, who shot 66 in each of the first two rounds, said it was easily the toughest day of the three.

“The wind was quite tricky,’’ she said. “I played pretty consistent again, but the golf course was tougher, the conditions harder. I have to stay consistent and keep rolling in some putts.’’

“I know she’s from Korea and she played on the KLPGA Tour, and I know she’s hitting it quite long from seeing it from behind today,’’ Park said. “Except for that, I really don’t have much information.”