A Texan tale of war, oil and friendship

A Texan tale of war, oil and friendship 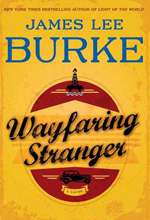 Author James Lee Burke is a descendant of tough Texas lawmen. In fact, his maternal great-grandfather once tangled with some of the West’s most notorious gunslingers.

Although Burke is most famous for hard-boiled crime novels featuring Louisiana lawman Dave Robicheaux, he has written seven fine novels inspired by the Hollan side of his family, changing the surname to Holland when he introduced Hackberry Holland, a hard-drinking lawyer, in “Lay Down My Sword and Shield’’ in 1971.

In “Wayfaring Stranger,’’ he introduces another member of the family, Weldon Avery Holland. When we first meet him, it’s 1934, and Weldon, a teenager, is living on a hardscrabble Texas farm with his mentally ill mother and his grumpy grandfather, the man who had fought the likes of John Wesley Hardin, Bill Dalton and Pancho Villa.

But now, Clyde Barrow and Bonnie Parker wander into their lives, hiding out on the edge of the Holland property between bank robberies.

Unsure if they are evil thugs or the avenging angels Depression-era popular culture made them out to be, Weldon is haunted by the encounter.

But later, as a second lieutenant, Weldon and his sergeant, Hershel Pine, discover what true evil is when a Waffen SS Tiger tank nearly takes their lives.

Separated from their unit, they accidentally wander into an abandoned Nazi death camp where Weldon saves a young woman named Rosita Lowenstein, who eventually agrees to be his wife.

After the war, Weldon and Hershel return to Texas where they go into business together, building pipelines for the booming oil business. But rich and politically well-connected Texans are eager to destroy their business and acquire the unique welding process they have patented.

The two friends want to believe they left evil behind in Europe, but they soon discover that anti-Semitism is not foreign to American soil, and that rampant greed is just another form of evil.

The forces arrayed against Weldon and Hershel bear down on them with all the force of a freight train, tearing at their marriages, threatening them with prison and even attempting to take their lives.

The epic story Burke has fashioned is thick with tension to the very end. His characters, both heroes and villains, are superbly well drawn, and as in every Burke novel, the poetic descriptions of both urban and country settings bring Texas to life on the page.

Burke’s last three novels, “Light of the World,’’ “Creole Belle’’ and “Feast Day of Fools,’’ were arguably his best. “Wayfaring Stranger’’ joins them as one of his most powerful and ambitious novels to date.