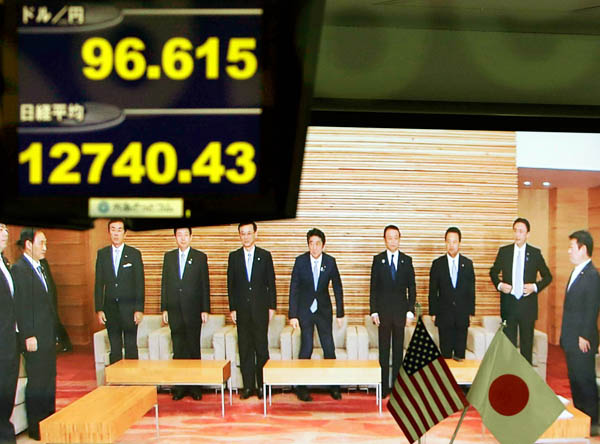 Prime Minister Shinzo Abe, center, and his Cabinet members behind a monitor showing the Japanese yen’s exchange rate against the dollar, top, and Nikkei stock average at a foreign exchange trading company in Tokyo in 2013. Japan’s government responded cautiously to a spike in the yen, with officials expressing concern about the violence of the move but no overt worries about weakening currency. [REUTERS/NEWS1]

Nishikubo is that rarity in Japan: a rebel entrepreneur who bets big and makes deals many contemporaries would never contemplate. Most famously, Nishikubo bought into money-losing budget airline Skymark in 2003 and took on its presidency a year later. Indeed, he got so into learning what airlines do that he took flying lessons.

In 2010, he decided to soar higher. Peers shook their heads at news Nishikubo was ordering four Airbus A380s, later coming back for two more. A February 2011 Orient Aviation magazine headline summed it up succinctly: “Crazy or a genius?”

As that deal now implodes, many might answer “crazy.” Still, Abenomics deserves a share of the blame.

Were Nishikubo’s ambitions bigger than demand for seats on his airline? Probably. But when he ordered that fleet of A380s, the yen was trading about 80 to the dollar. Its subsequent 20 percent-plus drop in value really smarts when you’re paying for planes that list at $414 million.

This is something Japan-watchers consistently seem to ignore. Prime Minister Abe’s devaluation is routinely couched as smart economic policy. But it’s disastrous for companies like airlines that buy fuel and aircraft - both prohibitively expensive in the best of times - priced in U.S. currency. Exchange rates clearly contributed to Nishikubo’s undoing.

If Abe were looking through the economic lens of today, not one from 1994, he might engineer a stronger yen. On the one hand, a rising currency is about confidence; Japan’s weak-yen obsession comes more from insecurity. On the other, with nuclear reactors idled amid safety concerns, Japan’s energy needs have the economy importing inflation - the bad kind. Also, a lower yen runs contrary to Abe’s ambitions for Japan Inc. to expand abroad anew.

For many, like those in the energy sector, the weak yen can be an impediment, something Nishikubo can tell you all about. It’s also not working this time. In June alone, industrial output dropped 3.3 percent from the previous month - a reminder that the ongoing transfer of production overseas has deadened the benefits of yen devaluations. The value of Japanese exports is now 23 percent below its March 2008 peak, while those of Germany, South Korea and the U.S. grow. And while currency rates are pumping up corporate profits, what good is that if executives aren’t sharing the spoils with workers?

Yes, Skymark is partly a tale of hubris. Nishikubo turned the carrier around by switching to smaller, more profitable Boeing 737 planes. He let his ambitions run away with him when he bet A380s would help him take on All Nippon Airways and Japan Airlines. But Nishikubo’s gambit might have stayed aloft had Abenomics not sent the yen plunging.