As use of credit cards wanes, companies push hybrids

As use of credit cards wanes, companies push hybrids 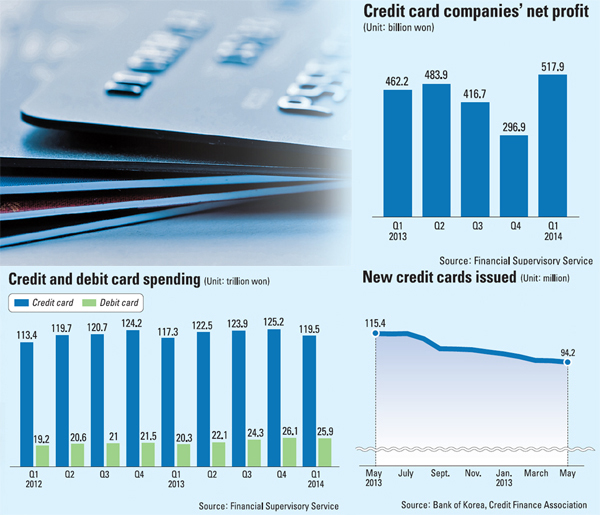 “Although there is some year-end tax return benefit from using a credit card, I mostly use the debit card service,” Lee said.

He is not alone. Credit card use has shrunk significantly. This is largely because the year-end tax return benefit on credit card spending was reduced after being labeled a key factor in the nation’s growing household debt, while consumers have become more frugal as economic growth has slowed.

More consumers are using their debit cards and financial companies noticing such changes have stepped up marketing.

According to the Bank of Korea and the Credit Finance Association, as of May there were 94 million credit cards in use. This is 18.3 percent less than the 115.4 million cards reported a year ago. One of the main reasons the number of credit cards has fallen is the new government policy that automatically cancels any card that hasn’t been used for a year. Previously a credit card could only be canceled at the owner’s request.

As a result, the number of active credit cards fell below 100 million in February for the first time since 2009.

The financial authority in 2012 raised the bar on credit card issuances to reduce the number of high risk users. Instead of evaluating the person requesting for a credit card issuance based on their nominal income, financial companies now look at disposable income, or what is left after debt obligations.

For example, applicants with credit ratings in the lower four tiers must prove a monthly disposable income of at least 500,000 won.

This system was intended to curb the reckless issuance of credit cards, which nearly caused a major financial crisis in 2003.

One of the worst leaks of personal information by the three credit card companies - KB, NH and Lotte Card - earlier this year has only made the situation worse for credit card issuers.

The three credit card issuers saw 7.84 million cards canceled, including those that hadn’t been used for more than a year but largely because of the leaks of personal data.

While credit card issuers had their hands tied in attracting new customers, debit cards rapidly increased thanks to an expanded year-end tax benefit. While the ceiling for the tax return on credit card spending was reduced from 25 percent of the annual salary to 15 percent, the debit card ceiling went from 30 percent to 40 percent last week.

Credit cards also are losing their appeal among young customers as issuers cut back on benefits.

Most recently, Korea Exchange Bank announced a reduction in benefits for its popular 2X Card, with more than 1.6 million subscribers, which will likely be implemented starting in February.

Since hybrid cards were introduced in 2012, they have gained in popularity due to various freebies and discounts on smartphone bills, theaters and coffee shops.

The accumulation of points that could later be used like cash according to the amount spent will no longer be available, while the free popcorn and two sodas at CGV movie theaters will be scrapped as well.

As credit cards lose their appeal, issuers are retargeting their business to debit cards by introducing new products like the hybrid card that acts as a debit card as well as a credit card. When the money in the bank account linked to the debit card runs out, the subscriber can use the card as a credit card.

The hybrid card was introduced in in 2012 and has gained wide popularity since the eligibility requirements for credit cards have been raised.

The hybrid card, however, unlike the more accessible debit card, has a condition. The person applying for it has to have a certain credit rating. Additionally, the interest on unpaid balances on hybrid cards can be more than 20 percent, which is exceptionally high.

Credit card companies also are providing various benefits such as discounts on fast food, gasoline and even public transportation for debit card products to lure customers.

KB Kookmin Card jumped on the bandwagon last month with its debit card Hunminjeongeum, which focuses on education and medicine.

Shinhan Card in June introduced its debit card S-Line, which offers a maximum of 0.5 percent of the purchase as accumulating points that can be used later like cash. Additionally, subscribers who spend at least 300,000 won more than the previous month are exempt from service fees from Shinhan Bank and eligible for reduced-interest loans.