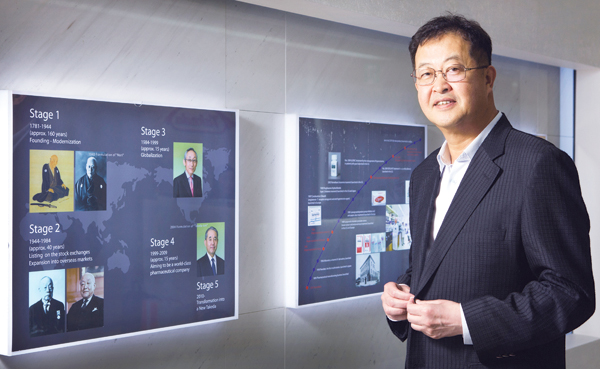 Lee Choon-yup, president and general manager of Takeda Pharmaceuticals Korea, believes the most important ingredient in a recipe for business success is “good people.” With this thought in mind, Lee, who has 26 years of experience in the pharmaceutical industry, was instrumental in establishing the Korean affiliate of Japan-based Takeda in 2011.

“I believe that a humanistic approach is most important when it comes to managing a business,” said Lee, in an interview with the Korea JoongAng Daily last week at his office in Daechi-dong, southern Seoul. “What my boss [in Japan] and I often talk about is that good people make a good company.”

Lee added that in the end, having talented individuals in a company is most important, and such people by definition would be those who not only are competent but also cooperative, sincere and think about the common interest.

In the three years since Takeda set up its Korean office, sales jumped from 36.4 billion won ($35.1 million) in 2011 to 121.4 billion won last year. The number of employees also increased from 40 to 200 over the same period. Takeda Pharmaceuticals Company is Asia’s No. 1 pharmaceutical company and 12th-largest in the world.


Q. Takeda Pharmaceuticals Korea celebrates its third anniversary in Korea this year. What have you focused on over those years?

A. As I worked for a multinational pharmaceutical company previously, I had in mind that I should position Takeda Pharmaceuticals Korea as a global company. But our customers seemed to think of Takeda not as a multinational company at first, but as Japan’s largest pharmaceutical company. [To position the company in the industry here in Korea] I emphasized autonomy and cooperation within the company and also the significance of working together. For example, every company holds a plan of action sales strategy meeting every quarter and it often is the case that employees in charge of sales and marketing attend that meeting. But at Takeda Pharmaceuticals Korea, all employees participate in the meeting and discuss the direction the company should take. Also, all employees participate in identifying the company’s top 20 goals and if one is reached, then we all celebrate together and distribute gifts. This cooperative mind-set and togetherness has led us to increase sales. [Takeda Pharmaceuticals Korea’s sales doubled in the 2014 fiscal year compared to the previous year.]


Takeda Pharmaceuticals Company operates in about 80 countries. What kind of a market is Korea?

The Korean pharmaceutical industry is growing on a single digit basis, which [for multinational companies] could not be appealing as a market. But Takeda Pharmaceuticals Korea has grown remarkably. Headquarters also is taking notice of how we are growing even though the market itself is flat. We started marketing and selling the osteoporosis treatment called Evista and also the diabetes treatment called Actos, which had been marketed by Lilly. The two products were not strategically important drugs for Lilly. But after we started marketing the two products, Evista became No. 1 in the industry, while sales of Actos jumped more than 50 percent last year [compared to the previous year]. This year so far, sales of Actos have increased more than 45 percent. For us, what’s important is product potential. We think it’s important to never take that for granted. This kind of thinking leads us to new approaches. When we started marketing the products, we didn’t think negatively and question whether they would sell well, even though they had previously failed. Rather, we asked ourselves why the drug didn’t sell well here like it had in other countries. And when we find new value in it [product], then medical officials also see the value in it. This is how Evista became the No. 1 [osteoporosis treatment] drug. Our business philosophy as a whole is Takedaism - a never-say-die spirit. We didn’t give up [on the two products] and stayed together. That’s what made us successful.

From left: Employees at Takeda Pharmaceuticals Korea attend a volunteer team workshop that is aimed at enhancing company loyalty; Lee Choon-yup, president and general manager of Takeda reads a newly published fairy tale book by the company and the Korean Diabetes Association; Lee, front left, his employees and performers pose together after a first performance of “Dorothy and the Wizard of Health” at a children’s home to raise awareness on health. Provided by the company


Does the Japanese headquarters have big expectations for the Korean market?

When our global chief executive [Yasuchika] Hasegawa was in town, he was amazed that all employees in the Korean office speak English very well. He complimented us as a good model of globalization. For a company to globalize, it is important to go back to basics. Many Japanese companies that have set up businesses in Korea use Japanese in their offices, but Takeda Pharmaceuticals Korea is the only company I’m aware of that uses English as a common language. This also is true of our headquarters. The incoming chief executive of Takeda is Christophe Weber, who is French. Also, half of the global board of directors are foreigners. Takeda is making strong efforts to transform itself into a global pharmaceutical company. The Korean office is trying to actively push that as well. For example, most employees in the Korean office use their English names, as we think they are much easier to remember for foreigners. This is part of our own efforts to globalize. We also are trying to send our employees to offices in other countries while at the same time welcoming Japanese employees through an exchange program.

Have there been any examples of Korean employees sent to other offices?

For the Korean office to globalize, it’s important to nurture global talent. This isn’t for just us. For Korea to grow, global skills are needed, and we thought we should somehow set a foundation for that. As an example, from the Korean office, Soh Soo-jin, our information system and information technology project manager, was one of the founding members of Takeda Pharmaceuticals Korea, and she contributed to successfully setting up an internal IT infrastructure. Based on her experience, she was promoted to project manager for the North Asia region. Such examples have created a mind-set within Takeda headquarters that the Korean office has many talented people, and headquarters has been telling us to send more of them to the head office in Japan. About 10 Korean employees are currently working at the headquarters, and for the past two years, officials from the headquarters have come to Korea to attend recruitment fairs at Korean universities.


Let’s talk about the pharmaceutical industry in Korea, which faces many challenges as the government is set on lowering drug prices.

In any country, finances matter. I believe there are concerns in every country. What I would like to emphasize is that new drugs are important because people should have access to good drugs. It would be good if [the government] paid higher reimbursements on drugs that are important for maintaining patients’ lives. It’s important to think about how Korea should frame the pharmaceutical industry. A policy that recognizes the value of new drugs is important. Korea should set up a [price] structure that balances the financial burden with the value of the drug. The [government] should have a long-term perspective and research the systems of other developed countries.

There’s much recognition given to new drugs. There’s a big difference, as well. Based on a study comparing drug prices in 30 Organization for Economic Cooperation and Development countries, the price of new drugs in Korea was only 43 percent of the OECD average price. We are continuously delivering our thoughts to the government through the Korea Research-based Pharmaceutical Industry Association and the Korea Pharmaceutical Manufacturers Association.

Are there any ongoing or plans for future R&D projects with Korean pharmaceutical companies?

We have plans to expand collaboration with Korean companies in developing technologies and products in patient care. We have continued a global R&D study with LG Life Sciences and Samyang Corporation. Samyang holds a strong drug delivery system formulation technology [that distributes medicines in the body quickly and efficiently]. Also, we are collaborating with LG Life Sciences on its flagship obesity research project. Such collaboration involves not just investment, but also technical cooperation to accelerate a drug’s development. We hope to further expand collaboration opportunities.

1978-1985: Bachelor’s in life science with minor in sociology, Sogang University 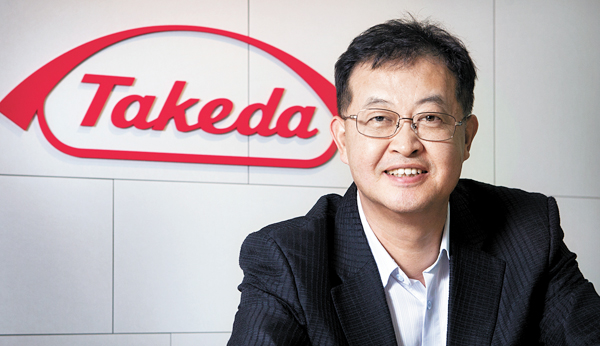