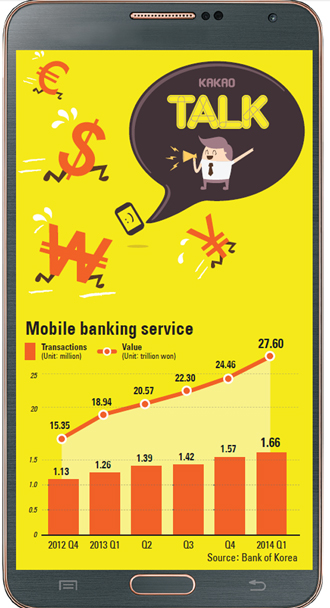 With more customers using mobile finance services, a battle has begun in the banking and telecommunications world.

KakaoTalk, the nation’s largest messenger app, plans to begin handling mobile transactions and payments as early as next month. China’s largest online payment company, Alipay, also is working to become an electronic prepayment issuer under Korean law. Financial companies are scrambling to secure customers by partnering with KakaoTalk, while at the same time continuing to develop their own electronic purses.

According to the Bank of Korea and Statistics Korea, the number of registered mobile banking users surpassed 40 million this year and mobile devices now account for 43 percent of all Internet banking. Mobile payments using credit cards are 3.2 trillion won ($3.1 billion), or about 30 percent of total online shopping payments. Compared to the second quarter last year, the value of online shopping payments from April through June increased 14.4 percent, but the increase for mobile devices was 136.9 percent.

KakaoTalk’s money transfer and payment service, Bank Wallet Kakao, will work with 14 banks: Woori, Kookmin, Shinhan, Standard Chartered, Korea Exchange Bank, Busan, Nonghyup, Suhyup, Citi, Daegu, Kyongnam, Jeonbuk, Kwangju and Jeju. The service creates a virtual wallet for users that can be loaded with up to 500,000 won per day with each transfer limited to 100,000 won.

Hana Bank is one financial institution that is not partnering with KakaoTalk, explaining that “in cases of accidents, the responsibility or follow-up process is not clear.”

Hana’s own Hana N Wallet, launched in 2012, offers a similar service to that of Bank Wallet Kakao. There is a virtual currency, called “cashnut,” that people can use for purchases or to transfer money. Recently, Hana expanded the number of affiliated stores that accept cashnut by collaborating with GS Retail, and users of Hana N Wallet receive prime rates on installment savings.

Hana Bank also partnered with Alipay. Chinese customers can charge Chinese yuan and Hana Bank exchanges it for Korean won or U.S. dollars. “Once Alipay gets settled in Korea, the partnership will also expand,” said a Hana insider.

Shinhan Bank launched “My Shinhan Pay” last month, a service that enables direct debit payments. Shinhan also offers Zoomoney, an electronic wallet in cooperation with KT. Users can open a virtual account with their mobile phone numbers and charge it with cybermoney that can be used for transfers and payments.

Some apps are geared to users who prefer a quick and easy app. Woori Bank has opened its new one-touch smart banking service, which takes up the least amount of space on smartphones. The app separates banking services with balance inquiry, transaction and cash withdrawal functions from financial center services.

The credit card industry decided to go along with Kakao for now. Kakao Talk has collaborated with nine credit card companies, including KB, Hana and SK. It is expected that the service, temporarily named Kakao Easy Payment, can begin as early as next month. Instead of using the typical digital verification system, it is expected to use MPay, a security verification method developed by LG CNS, and expand services starting with home shopping.