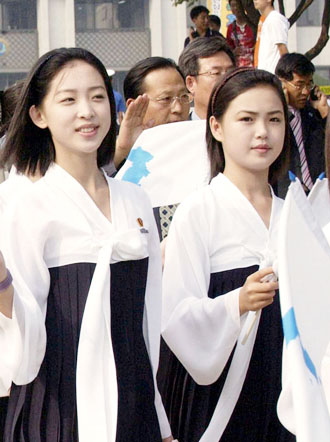 Ri Sol-ju, right, the current first lady of North Korea, visited South Korea as a cheerleader for the 2005 Asian Athletics Championship in Incheon. Her visit was exclusively reported on by the JoongAng Ilbo on July 26, 2012. [JoongAng Ilbo]

In Pyongyang, hundreds of attractive young girls are now being subjected to a vigorous cheerleading program in preparation for their performance at the upcoming Asian Games in Incheon.

Mostly in their 20s, the girls in this camp allegedly learn how to dance in unison, cheer gracefully, walk like true ladies, dress themselves and apply makeup. They’re even educated on how to properly converse with people from the outside world.

In a sense, their training is just like that of their Southern counterparts in the Miss Korea beauty competition.

North Korea’s cheerleaders were already selected in late June, sources familiar with the situation say, and they are currently undergoing a three-month intensive training program ahead of the 17th annual Asian Games, scheduled for September.

Some may be curious as to why the girls are sent to the camp, particularly since the two Koreas have not yet reached an agreement on how their stay in the South will be funded.

Yet sources say North Korean leader Kim Jong-un has already made up his mind to send his cheerleaders to the Asian Games, ordering them to continue their training despite failed negotiations between the two Koreas in July over which nation should pay for the girls’ accommodations, transportation and other services during their stay.

According to the South’s Ministry of Unification, the size of the squad planned to be sent to the South this year is unprecedented, with 350 cheerleaders, assistants and other officials.

But whether they are being used as true delegates working toward reconciliation between the two Koreas or are merely tokens to praise the regime and hamper relations is oftentimes questionable.

To become a cheerleader in North Korea is, indeed, no easy feat.

The girls selected are intensely scrutinized. Students are chosen from around 10 art schools based in Pyongyang and judged on their beauty and vocal abilities. Height is also a crucial factor - they should be taller than 160 centimeters (5 feet 2 inches).

On top of grueling workouts, the cheerleaders are also learning how to apply smoky eye makeup, which was previously banned, and some have even been forced to have plastic surgery, including double-eyelid operations and Botox injections.

Plastic surgery is even offered to some of the privileged for free if authorities believe it to be necessary and beneficial to the Communist regime.

Family background is critical, too. The Ministry of State Security, the regime’s top spy agency, selects the cheerleaders and has officials thoroughly investigate their family backgrounds.

Ahead of the upcoming Incheon Asian Games, rumors spread in Pyongyang about rampant bribery among high-ranking officials eager to get their child a spot on the cheerleading squad. The officials allegedly bribed the competition’s managers by handing over large “donations.”

Some parents were told that their daughters were tentatively chosen - though the girls would have to obtain plastic surgery before securing a final spot. A few gave up on the idea right then and there because they couldn’t afford the costs.

Several years ago, when this JoongAng Ilbo reporter visited Pyongyang, a female assistant at the Pyongyang Koryo Hotel admitted that “those in charge of greeting guests from the South or other countries at restaurants that serve international cuisine, or workers in charge of international business services, can receive plastic surgery free of charge.”

However, the final members of the cheerleading group are considered the top female elite in North Korea not only in terms of their beauty, but also for their impeccable family backgrounds and “sincere loyalty” to the Communist state.

Since former cheerleader Ri Sol-ju became the first lady of the regime, more parents have seen it as an opportunity for their children to “move up” in the social hierarchy.

In fact, Ri, who visited the South in September 2005 as a cheerleader for the Athletic Championships in Incheon, grew up in an ordinary family.

Her father was a former pilot in the Korean People’s Army Air Force. When she became first lady, analysts in Seoul said her career as a cheerleader may have been a crucial factor in her becoming “the Cinderella of Pyongyang.”

“There was a tip-off that some inner-circle officials in the ruling Workers’ Party and the North Korean military are rushing to lobby Ri Sol-ju after rumors spread that she was also involved in choosing the girls for the Incheon games,” said a Seoul intelligence official.

The cheerleaders are thoroughly isolated from the outside at the training camp, where they not only practice cheerleading but also go through political brainwashing.

The core lesson of the training is “we are at the forefront, spearheading the Workers’ Party to promote the greatness of our dear leader in the territory of our enemy of the state [South Korea],” sources claimed.

While they stay in South Korea, they should always be under the surveillance of officials from the Ministry of State Security, they added.

They should also report their conversations with any South Korean during their stay, and have one-hour daily meetings with officials to reflect on their daily actions as well as report their observations concerning fellow cheerleaders.

If they are found to make any grave mistakes, they are physically punished by State Security Ministry officials, sources said, which could likely be a reason why the North arranged for a ferry to be used as the cheerleaders’ accommodation, rather than South Korean hotels.

A state vehicle could allegedly serve as a way of hiding any potential punishment.

Upon their return to the North, they usually face other intense training and are ordered not to divulge to anyone what they saw in the South, especially concerning its economic development and capitalism, sources say.

But despite orders, some girls have been known to leak information to their friends or families, which has led to brutal punishment afterward.

According to a 2009 report by the U.S. State Department on human rights violations within North Korea, one cheerleader - one of 21 girls sent to the 2003 Summer Universiade in Daegu - was sent to a concentration labor camp in Tanchon.

According to the report, she allegedly said: “There were more cars in the South, and they were also wealthier than us.”

Still, sources said Pyongyang officials were actually struggling to deal with the girls, as the two Koreas failed to agree in July on how their stay in South Korea would be financed.

Their training has not been observed on South Korean and U.S. satellites so far, officials confirmed, allegedly because their practices are carried out indoors.

“The girls are [likely] trying to make their faces and skin color appear whiter [to look prettier,]” another intelligence official in Seoul said in response.

Currently, Pyongyang demands that Seoul pay for its cheerleaders, just as the former South Korean administrations of Kim Dae-jung and Roh Moo-hyun did.

However, the Park Geun-hye government has called upon Pyongyang to follow “international standards,” demanding the state pay its own expenses.

Some civic activists in South Korea, however, are asking the government to be “flexible” in dealing with North Korea to improve the strained relations and boost inter-Korean exchanges.

Under the Inter-Korean Cooperation Fund Act, the South Korean government can spend the state budget on “interactions and cooperation that contributes to the restoration of unity and trust of the people.”

For now though, it is time for the government to seek an answer on whether North Korea’s cheerleaders are indeed delegates for reconciliation, or, otherwise, just another political tool praising the regime and agitating South Korean politics.