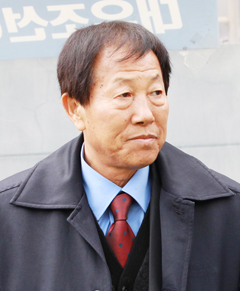 Gyeongnam FC Coach Lee Cha-man, who brought high expectations along with him when he returned to the team 15 years after leaving the post, has resigned, saying he is accountable for the team’s poor performance throughout the season.

The 64-year-old Lee announced his resignation Sunday after a 2-0 loss on the road to Incheon United.

Gyeongnam FC has been winless in its past 16 matches since beating Incheon on March 26.

The club was 2-9-9 after the Sunday match and was in last place in the K-League.

The trend in hiring has been to pick young coaches such as Choi Yong-soo (41, FC Seoul), Hwang Sun-hong (44, Pohang Steelers) and Seo Jung-won (42, Suwon Samsung Bluewings, 42).

But Gyeongnam FC bucked that trend with Lee, saying at the time that his experience and football knowledge would take the team to a new level. That turned out to be a lower level.

Nothing has worked out well for the team lately. The club sent down its assistant coach, Lee Heung-sil, 53, who had been managing technical strategy, to a farm team as part of a wake-up call to players.

Then it brought in Branko Babic of Serbia as a technical adviser.

Meanwhile, sources said the club is under financial stress. It failed to find a sponsor after the 2012 season and has been raising money by selling its young prospects to other clubs such as FC Seoul, Suwon and Jeonbuk Hyundai Motors.

Gyeongnam FC, based in Changwon, South Gyeongsang, is also having a hard time attracting fans, with local residents flocking to NC Dinos games in the Korea Baseball Organization.

The Dinos, in their second year in the KBO, are in third place behind the Samsung Lions and Nexen Heroes with a record of 52-42 and are on track for their first trip to the postseason in September.

“Finding a new coach is the first priority for us,” a spokesman for Gyeongnam FC said yesterday.

“But we also need to get rid of this terrible losing atmosphere that has covered the whole clubhouse all season long. We are trying to listen to any advice from anywhere that would help the team improve.”

The club expects to announce a new coach within a week.