Rookie prevails over nerves and Park

Rookie prevails over nerves and Park 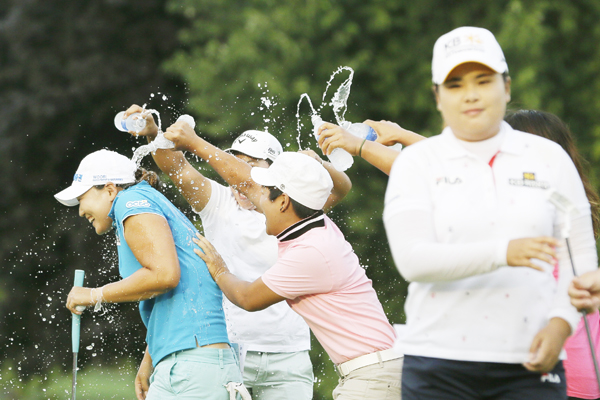 Lee Mi-rim of Korea is doused by other players and friends as compatriot Park In-bee leaves the green after the second playoff hole Sunday at the Meijer LPGA Classic at Blythefield Country Club in Belmont, Michigan. [AP/NEWSIS]

Lee Mi-rim won the Meijer LPGA Classic on Sunday for her first LPGA Tour victory, beating fellow South Korean Park In-bee with a birdie on the second hole of a playoff.

The long-hitting Lee drove into a greenside bunker on the second extra hole - the short par-4 17th - and blasted out to five feet. After Park’s 15-foot birdie try lipped out, Lee holed her putt for the victory.

They each parred the 18th to open the playoff. Park’s approach shot hit the cup on the way past and she missed a 15-foot birdie attempt. Lee two-putted from 35 feet.

Lee is projected to jump to 29th in the world rankings.

Norway’s Suzann Pettersen was a stroke back after a 69.

Park said the win will give Lee great confidence.

With three holes to play, Park, Pettersen and Lee were tied for the lead at 14 under, but Pettersen had tree and sand troubles and made a bogey at 16 to fall a shot behind.

Park and Lee each missed birdie chances on the 17th. On the 18th, Lee two-putted for par from 40 feet, and Park made a 6-foot par putt.

Park said that in the end, the new blade putter she put in her bag this week let her down.

“I felt I hit a good putt, but it just didn’t go in,’’ she said of the final birdie attempt. “The putter just wasn’t there. It was nice to shoot under par, but Mirim played well in the playoff holes.’’

Pettersen, who was playing in the group in front of Park for the day, birdied the first two holes and eagled the par-5 fifth - hitting a 3-wood shot to 6 feet - to tie Park at 15 under.

Lee birdied the par-5 11th to pull within a shot of Park.

After 10 consecutive pars, Park three-putted the par-3 14th for a bogey. It happened about the same time Pettersen was punching a shot from the trees to eight feet at 15 to set up a birdie and another tie.

“It’s nice to get four solid rounds of competition in,’’ Pettersen said. “I’ve struggled this year, but it is coming. Disappointed to be one short, but it was nice to be back in contention straight after a three-week break.’’

Lee, trailing most of the day by a shot or two, then joined Park and Pettersen at 14 under with a 5-foot birdie putt at 15.

Japan’s Haru Nomura was fourth at 10-under after a 68. Germany’s Sandra Gal, the first-round leader, was another stroke back after a 66.

Top-ranked Stacy Lewis had her best round of the week with a 66 to tie for 11th at 6 under.

Thailand’s Thidapa Suwannapura matched the low round of the tournament with a 64, which included five birdies and an eagle at the par-4 10th. She tied for 18th at 4 under.