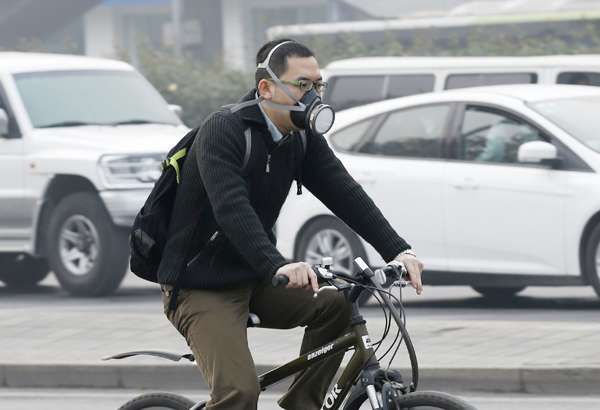 A man wearing a mask rides a bicycle during a smoggy day in Beijing in October 2013. [REUTERS/NEWS1]

NEW YORK - There are few areas of public discourse where the old adage, “People who live in glass houses shouldn’t throw stones,” is more applicable than climate change. Given that fossil fuels are the lifeblood of the global economy, nobody has clean hands - and those who wish to lead the battle against global warming risk attracting the charge of hypocrisy. They must therefore be transparent about what they are willing to offer and how it affects their own interests.

The billionaire former hedge-fund manager Tom Steyer is a case in point. Steyer recently pledged to donate $100 million to candidates in the 2014 U.S. midterm elections who favor aggressive action to reduce carbon-dioxide emissions. But Steyer’s own hedge fund, it soon emerged, had financed an Australian coal mine that is projected to produce hundreds of millions of tons of carbon dioxide emissions over the next three decades. Steyer has since left the hedge fund and sold his coal interests, though it was unclear until recently whether he was still benefiting from his investments.

Although Steyer profited handsomely from the fossil fuels that he now opposes, many environmentalists and Democrats view him as an invaluable counterweight to the billionaire Koch brothers. They, too, made a fortune from fossil fuels, but they oppose any move to mandate emission reductions.

Indeed, following a thoughtful New York Times article about Steyer’s investments, the presidents of four large environmental organizations leapt to his defense, arguing: “Rather than mocking those with the courage to change - whether for switching from an SUV to a hybrid, adding solar panels to help power a school, or rethinking how they invest their money in the global economy - we should regard them as individuals who are taking steps toward a cleaner tomorrow.” Bill McKibben, a People’s Climate March organizer, denounced the Times article as a “transparent hit job.”

Americans may love stories about individual change and redemption, but the global poor - who will be the principal victims of global warming - are more interested in what we do than in the state of our souls. Steyer’s deeds matter, not because he is an Everyman who switches from an SUV to a hybrid, but because he is a key player in the global economy who wants to make a difference. It is not so much his character, but the consequences of his engagement, that are significant.

But Steyer or anyone else who genuinely wants to lead the way must also recognize the wider effects - including the potential harm - caused by their aims and actions. Consider, for example, the U.S. economy’s shift from manufacturing to services and technology. It has boosted total growth overall, but those Silicon Valley fortunes have done little for workers in Cleveland or Detroit. Similarly, while the world will be better off when the last coal mine is closed, many people will suffer disproportionately in the process.

Thus, Steyer and other privileged advocates for stronger climate change policies must be willing to suffer losses themselves, and consider how others who lose out can be helped. To his credit, Steyer has become clearer about the cost of his fossil-fuels divestment, which suggests that he has a better understanding than many of his defenders of what political credibility demands.

The debate about Steyer is also important for the conduct of U.S. politics more generally. Americans increasingly view the political process as a mud fight among factions of the super-rich that pursue their own interests; Steyer’s repositioning as a counterweight to the Koch brothers looks like more of the same. This sense is reinforced when environmentalists forgive their favorite billionaire for his involvement in the fossil-fuel industry and refer to him as if he was just another guy who changed his mind about which car to drive.

The question is whether the U.S. political system - itself so resistant to change - can rise to the climate change challenge. Global warming is, after all, one of humanity’s gravest and most complicated threats. Its causes and consequences transcend borders and extend centuries into the future. To combat it, our political systems must work much more efficiently and fairly. As the Steyer saga demonstrates, what is needed is more democracy, transparency and accountability - not more politics as usual.

*The author, a professor of environmental studies and philosophy at New York University, is the author of “Reason in a Dark Time: Why the Struggle Against Climate Change Failed - and What It Means for Our Future.”