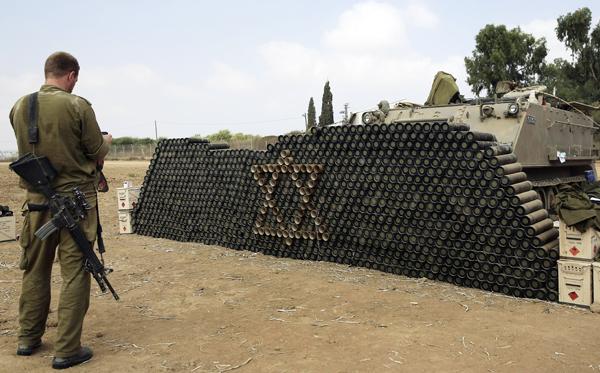 An Israeli reserve soldier takes a photograph with a mobile phone of a wall with the Star of David made from cardboard mortar shell boxes near the Israeli Gaza border in July 2014. [AP/NEWSIS]

I was bombarded with protests after my last column for suggesting our soldiers be allowed to keep and use mobile phones during their compulsory military service. Opponents say use of personal phones is an outrageous notion considering the danger they could be introduced if intercepted by North Korea. They also claim mobile phones could hurt discipline and lead to negligence of duty. They also challenged me as to whether phones helped protect students and quash violent school bullying.

My critics, while well-intentioned, are misguided. Mobile phones today can do more good than harm.

Cell phones are indispensable in most armies in advanced nations. American soldiers have had smartphone devices since 2010. Samsung Electronics signed a contract with the U.S. Defense Department and National Security Agency to provide Galaxy smartphones to military personnel. They can be life savers too, as was the case for an American soldier who faced a teenage bomber in Afghanistan. The iPhone in his pocket kept several bits of shrapnel from piercing his body and killing him. Israeli soldiers in confrontation with the militant group Hamas also carry mobile phones. Even Russian combat troops dispatched to Crimea were free to use cell phones.

The British have developed digital application for smart devices to locate explosives to protect and assist their soldiers in Afghanistan. Japan’s Self-Defense Forces are equipped with smart devices. The smart-technology communication replaced traditional communication systems after lines were cut during the devastating earthquake off the eastern coast of Japan in 2011.

In June, when a sergeant named Lim in a frontline unit ran amok in a shooting rampage following constant bullying and humiliation from his fellow soldiers, he was finally cornered by armed forces - and he asked to speak with his father. The commander pursuing him threw him his phone. If such communication had been possible in the previous week, the lives of five soldiers shot dead by the sergeant could have been saved. Lim tried to shoot himself and was stopped. While he was led away, two higher-ranking officials were seen making calls on mobile phones to report to superiors.

Mobile phone operators have been investigating the Sewol ferry sinking on their own. They discovered that students and other passengers on the sinking ship had communicated from the listing ship via KakaoTalk, a mobile messaging platform, through calls and text messages. The emergency police and rescue hotlines 112 and 119 were hardly used. Mobile phone operators want to create a joint emergency and disaster mobile communication platform that could connect district rescue services as well as police, military, fire and emergency departments and government offices. They say they have the technology, but are doubtful that the security-sensitive government will go along with the idea.

The tragedies of Lim and Private Yun, who was tormented and finally killed by superiors in April, share the fact that brutality came down from above - from the higher ranks. When Lim’s shooting rampage started, it was the unit commander who first fled with keys to the weaponry and arms storage. The senior sergeant in the 28th Division’s medical unit, where Yun served, reportedly ruled like an emperor and led the mob beatings. They are no different from the captain of the Sewol who was first to abandon his ship heedless of over 300 passengers on board.

Discharged soldiers angrily wrote on the Internet: “Never trust the military. They are best in undermining, covering, and falsifying reports.” “If you want to report on maltreatment, write with your left hand because they can track you down.” ... “A soldier’s biggest enemy is his immediate superior.” It is no wonder conscription is so dreaded and feared.

Korean soldiers are banned from using mobile phones due to the military command. The Defense Ministry can easily change the order. If security and other concerns are so important, cell phones could be allowed for about a half an hour a day during free times. The military also could use secure software to prohibit camera and GPS functions in military units. Our phone makers have met security standards of American armed forces. They can easily be of service to our military.

Mobile devices should be used to accommodate advanced military service. They must not be shunned because they could expose problems in military life. The sergeant of the 28th division who was a courageous whistleblower of Yun’s ordeal and tragic end - which otherwise may have remained in the dark - should be fairly rewarded and discharged with honor. The best reward for him would be one of many ways to end violence in the military. After my last column, one reader sneered that I must be a draft dodger for being so daft as to suggest the use of mobile phones in the military. Let me make the facts clear: I completed 30 months of military duty. My older son is doing his duty right now. His younger brother will likely follow two years from now.