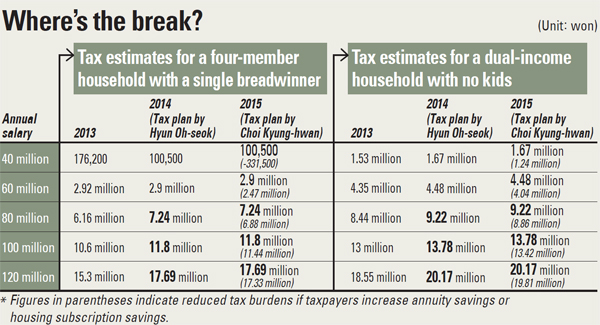 Many salaried men and women who were upset about the government’s tax reform plan last year were hopeful of Finance Minister Choi Kyung-hwan’s new economic team.

Choi pledged to reduce the tax burden on the middle class by providing tax deductions for building up retirement savings and housing subscription savings.

But they may be disappointed when they sit down to do their tax calculations early next year - especially if they make more than 70 million won ($67,900) a year.

The tax ranges and rates changed by former Finance Minister Hyun Oh-seok last year will be applied for this year.

According to a simulation of year-end tax settlements by the JoongAng Ilbo, Hana Bank’s Center for Inheritance and the Korean Taxpayers Union, taxpayers may get a tax break only if they increase retirement and housing subscription savings accounts that offer major deductions.

The simulation showed that a four-person household with two children and a single breadwinner who earns 80 million won in annual salary will pay 7.24 million won in taxes this year.

That amount is 1.08 million won higher than last year.

If breadwinners add 3 million won to their annuity or retirement savings, they will be subject to a lower tax rate for their retirement income, according to the newest tax reform, reducing the total tax payment by about 720,000 won.

Last week, the government said it would reduce the tax rate for retirement allowances by replacing the single rate of 40 percent with a range of 15 percent to 100 percent from 2016. Taxpayers with less than 120 million won in annual salary, about 98 percent of the population, would benefit from the plan, the Ministry of Strategy and Finance forecast.

The ministry will also expand the tax deduction ceiling on retirement pension products from the current 4 million won to 7 million won to help the country’s aging population prepare for retirement.

But the current economic team decided to maintain the previous team’s general taxation framework. Last year, former Finance Minister Hyun announced the government would not raise tax rates but would slash deductions in order to help plug holes in the government coffers.

“Taxpayers with more than 70 million won in annual salaries will face significantly higher taxes next year unless they increase annuity or housing subscription savings,” said Kim Young-rim, a tax accountant at Hana Bank’s Center for Inheritance.

The ministry also said it will double the ceiling for tax deduction for housing subscription savings from 1.2 million won to 2.4 million won.

On the other hand, people who earn less than 70 million won a year will benefit from the latest revisions.

The total tax for a breadwinner of a four-member household who earns 40 million won a year will be reduced from 176,200 won this year to 100,500 won next year. If the breadwinner pours an additional 3 million won into his or her retirement savings and 1.2 million more into housing subscription savings, they will get back 331,500 won in a tax refund.

“It is questionable whether tax benefits for households that boost their savings will contribute to improving sluggish domestic demand,” said Hong Ki-yong, a professor of business administration at the University of Incheon and honorary chairman of the Korean Taxpayers Union.