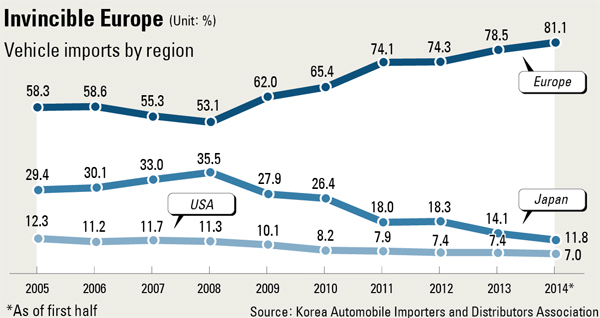 It’s no longer a secret that Korea has become a hot market for imported autos. Even in the wake of the Sewol ferry tragedy - when Koreans mourned by cutting back on consumption of just about everything - auto imports rose, especially from Europe.

According to data from the Korea Automobile Importers and Distributors Association (Kaida), registration of newly imported vehicles in July marked a new monthly record of 18,112 vehicles, 1.7 percent higher than in the previous month of June, which was also a record number.

The accumulated registrations of newly imported cars in the first half of 2014 stood at the highest number on record at 94,263 units, which is a 26.5 percent year-on-year increase, the Kaida report showed. Around 70 new models were introduced through the first half of the year.

“With the introduction of various new models and active promotions, every month of the first half of the year saw an average of 15,000 imported cars newly registered, while the share of imported cars in the market also rose to 13.87 percent,” Kaida said in its report.

What’s even more surprising is that eight out of 10 imports sold in Korea are European brands. Kaida data showed that of the 94,363 vehicles registered in the first half, 81.1 percent, or 76,491 units, were European cars.

This is the first time European car registrations exceeded the 80 percent mark in the first half of the year. Last year, the Europeans had 77.1 percent share of the imported auto market.

Of the 23 foreign auto brands registered with Kaida, 61 percent, or 14 brands, were from Europe, so a large share of total imports is predictable. But considering that European cars’ market share in the imports market was only 53.1 percent in 2008, the mighty growth becomes clear.

Kaida data shows that the growth is led by German brands such as BMW, Mercedes-Benz, Volkswagen, Audi and Porsche. They accounted for 67,033 vehicles in the first half, up 35 percent from a year earlier, and had 71.1 percent market share in the imports market, which is 4.4 percentage points above a year earlier.

In fact, nine out of 10 best-selling models in the first half were from Germany, according to Kaida. The Lexus ES300h from Japan, which was ranked ninth, was the only non-German model in the top 10.

Experts said the popularity of German cars has been boosted by their diesel models. Kaida data shows that 68.3 percent of imports sold in the first half were diesels, up 8.4 percentage points from a year ago.

“German brands have advanced diesel technology, which reduces noise and enhances performance, while they are also popular with consumers who care about fuel efficiency,” said Kim Pil-soo, a professor of automotive engineering at Daelim University College. Other European brands are also rising.

British-based brands, such as Jaguar and Land Rover, increased their sales 10.6 percent year-on-year to 5,665 units in the first half, taking a 6 percent share of the imported car market.

Although their volume is small, sales of Swedish brand Volvo jumped 40 percent year-on-year to 1,296 units, while sales of Italian cars, such as Fiat, soared 427.6 percent to 955 units in this first half.

Toyota and Honda both reported more than 30 percent year-on-year drops in first-half sales.

“As the quality of Korean cars like Hyundai and Kia have risen, some consumers feel that there’s no difference with Japanese cars,” a local analyst said.