NPAD calls for Sewol law’s terms to be reworked

NPAD calls for Sewol law’s terms to be reworked 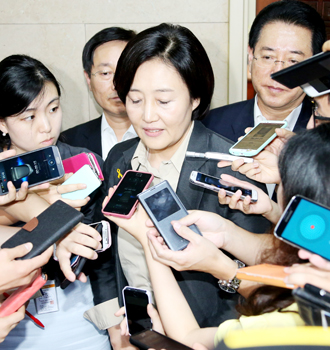 The main opposition New Politics Alliance for Democracy (NPAD) yesterday called upon the ruling party to renegotiate terms regarding a special law looking into the cause of the Sewol ferry disaster, though the two sides again failed to bridge the gap over how to select a special prosecutor in charge of the probe.

The floor leaders from each party held closed-door talks for three and a half hours yesterday but did not announce any details from the meeting.

“We did not finish negotiations yet,” Park Young-sun, the NPAD’s floor leader and acting chairwoman, told reporters after the meeting. “We decided not to divulge ongoing negotiations [to media]. We will meet again tomorrow.”

On Thursday, both parties agreed to launch a special investigative team led by a special prosecutor.

As the law currently stands, both parties would establish a seven-member committee that would then recommend two candidates for the special prosecutor who would oversee the investigative team.

The line-up for the recommendation committee has become an important factor not only for the opposition party but for the Sewol victims’ bereaved families.

The relatives of the victims believe a politically neutral figure should be in charge of the case in order to thoroughly investigate government officials and businessmen and get to the bottom of the alleged corruption surrounding the ferry accident, which killed more than 300 people.

Through a majority vote, the seven members would recommend two candidates, with President Park Geun-hye making the final decision.

The fact that the president has such authority has sparked opposition from the victims’ families, who believe the prosecutor could not be independent of pressure from the Blue House.

At the previous talks on Thursday, Park, the opposition floor leader, agreed with her Saenuri Party counterpart, Lee Wan-koo, to put two people from the opposition on the recommendation committee.

She faced immediate backlash from fellow party members as well as the victims’ families, who said the opposition party should lead the recommendation panel by selecting four people in order to have the majority vote.

Pressured by fellow lawmakers and the victims’ families, Park yesterday conveyed that demand to the Saenuri Party, which rebuffed the call.

“Last week, the ruling and opposition parties finally reached a consensus on legislation for the special Sewol law and held a hearing on it,” Park Dae-chul, a Saenuri spokesman, said at a briefing yesterday. “The opposition should keep the agreement ... If they scrap the agreement, it would be a blow to the public.”

The NPAD held a general meeting with its incumbent lawmakers yesterday to discuss recommendations for a special prosecutor.

Some hard-line members reportedly protested Park’s previous agreement, saying she gave in too much to the ruling party, while other NPAD members raised concerns that attacking her would only harm her leadership as acting chairwoman.

“We frequently witnessed that agreements made between floor leaders from both parties were broken by lawmakers,” senior NPAD lawmaker Woo Yoon-keun told Joo Ho-young, a Saenuri Party lawmaker. “Lawmakers in our opposition party are currently protesting, claiming our floor leader [Park] is pushing ahead with the agreement unilaterally.”

As of press time, the NPAD lawmakers were still discussing details regarding the special law with Chairwoman Park.