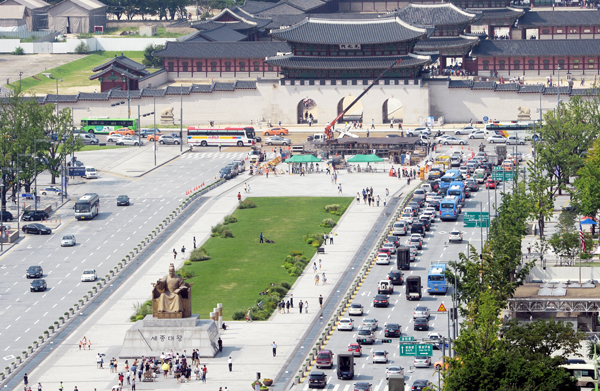 The cross atop the steeple of the Myeongdong Cathedral shifted to the left some 20 degrees following a strong wind three weeks earlier, church officials said yesterday, adding that it was a first in the structure’s 116-year history.

The revelation was made just three days before Pope Francis’ arrival in Seoul.

“I always checked out the steeple on my way to the church, and the cross looked a little strange on July 25,” said Choi Gi-rim Benedictus, the secretary-general of the cathedral, which sits on top of a hill amid the Myeongdong shopping district in central Seoul.

“I noticed after a closer look that the cross was turned around. The wind was so heavy overnight that the tent in front of the cathedral was swept all the way into the alley in the bustling area of Myeongdong way down there.”

Another church worker added that the rotation of the cross, especially in the midst of final preparations for the pontiff’s arrival, was baffling.

“I guess the event drove away any bad luck ahead of the Pope’s visit,” said one devoted churchgoer, surnamed Kim, 62, who has visited Myeongdong Cathedral for the past decade.

Repair work will not begin until Pope Francis leaves Korea. He is set to lead a Catholic mass dedicated to peace and reconciliation on Aug. 18, the last day of his five-day trip to Korea, at Myeongdong Cathedral. 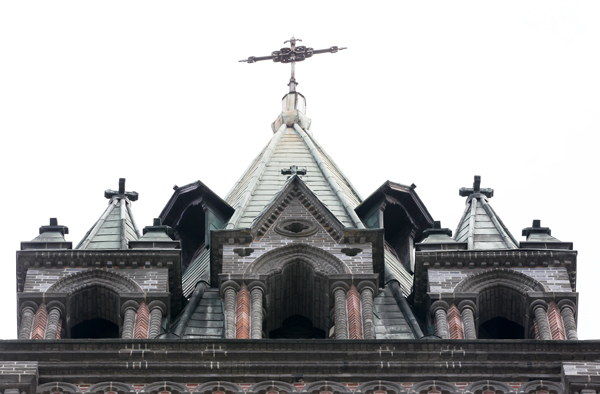 The cross atop the steeple of the Myeongdong Cathedral is seen shifted to the left. By Lee Young-hwan

“The repairs will require the mobilization of a large crane, given it cannot be mounted by a person,” one church official said. “We will decide on detailed measures after looking into how serious the damage is.”

Further consultations will be made with the Seoul Metropolitan Government and the Cultural Heritage Administration.

The Myeongdong Cathedral, the Church for the Archdiocese of Seoul, serves as a Catholic headquarters in Seoul and has symbolized Korean Catholicism for more than a century.

It was used as a field hospital during the 1950-53 Korean War and was designated by the government as Historic Site No. 258 in 1977. It also played a central role in the June Democracy Movement in 1987.

In preparation for the Pope’s visit, the Seoul government began blocking off traffic at 1 p.m. yesterday in some areas near Gwanghwamun to prepare for the papal beatification ceremony, to be presided over by Francis on Saturday at Gwanghwamun Square.

Traffic control around the venue will be implemented gradually from 7 p.m. Friday until 5 p.m. Saturday, the day of the event.