Artifacts that rarely travel outside of Italy and the Vatican are coming to Korea to celebrate Pope Francis’s five-day visit.

The Gates of Paradise, the east door of the Cathedral Santa Maria del Fiore in Florence, can be viewed in a six-month exhibition starting Friday at the National Palace Museum of Korea in central Seoul.

The seven-meter (22-feet) high wooden gate is decorated with 10 bronze panels and depicts major stories from the Bible’s Old Testament, such as Noah’s Ark and David and Goliath. Along with the gate, around 90 items, including paintings, clothing and holy relics used by previous popes, will be on display.

In addition, several globally known artists are also returning to their homeland for a celebratory performance in honor of the pope’s trip. Sumi Jo, one of the first Korean sopranos to become known internationally, has been invited to perform at the Daejeon World Cup Stadium on Friday. Jo will sing Bach and Gounod’s “Ave Maria,” Italian composer Ennio Morricone’s “Nella Fantasia” and Russian composer Igor Krutoy’s “La Fantasia.” Jo said in an interview earlier this year that it is her dream to sing in front of a pope. 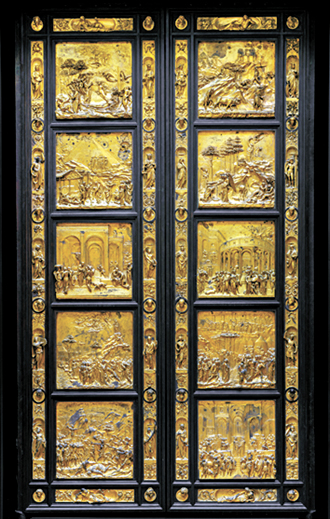 Gates of Paradise, the east gate of Florence Cathedral in Italy. [JoongAng Ilbo]

Veteran pianist Kun-woo Paik will also perform in front of Pope Francis at Gwanghwamun Plaza on Saturday. He will play Franz Liszt’s “St. Francis of Assisi Preaching to the Birds” prior to a Mass the Pope will hold.

As well as these performances, the Sejong Center for the Performing Arts is hosting a photo exhibition showing the pope’s day-to-day life along with images depicting Korea’s relationship with the Vatican over the last 200 years.

The display, “Hello Papa Francis,” will present about 40 photos of the Pope provided by the Vatican and around 100 taken by Baek Nam-sik, who has had the official right to take pictures of popes for around 50 years.

Meanwhile, the Seoul Metropolitan Library has separated some books about Catholicism from its usual collection to commemorate the Pope’s visit. The exhibition, “Hello Catholic,” will last until Aug. 29 to provide locals with a better and deeper understanding about the culture and history of the religion through 41 books.

The exhibition is open from 9 a.m. to 9 p.m. on Tuesdays through Fridays and to 6 p.m. on Saturdays and Sundays but will stay open one hour later this Saturday due to an event in which the Pope will beatify Catholic martyrs in nearby Gwanghwamun. For more information, go to www.lib.seoul.go.kr.