Gap between SMEs and conglomerates grows

Gap between SMEs and conglomerates grows 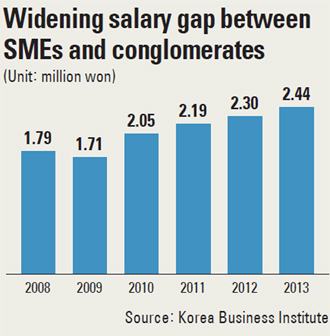 Despite the Park Geun-hye administration’s drive to support a creative economy and boost small and midsize businesses, the disparity between them and conglomerates is widening, raising alarms over talent and productivity at smaller businesses.

According to a study by the Korea Business Institute released yesterday, the gap between conglomerates and small and midsize businesses is apparent in the paychecks of their employees.

The disparity increased even though employees at small and midsize companies saw their average monthly wages increase from 2.23 million won to 2.73 million won during the same period.

Between 2002 and 2007, the average paycheck of an employee at a small or midsize company was 59.4 percent that of a conglomerate employee. That percentage dropped to 54.5 after the global financial crisis.

As the salaries of small business employees shrink comparatively, many people have decided not to apply for work at those companies, leaving them with a critical shortage of talent and leading to decreased productivity.

Small and midsize businesses’ contribution to the nation’s production fell from 21.1 percent in 2009, which is the latest data available, to 17.2 percent last year. During the same period, the contribution of conglomerates’ rose from 62.8 percent to 67 percent.

The study noted the increasing difference in wages between small and midsize companies and conglomerates, as well as flagging innovation cpapbility and slow economic growth as primary reasons for the eroding contribution of smaller manufacturers to the Korea’s economy.

Small and midsize businesses were affected more than larger businesses by slow economic growth. Average annual GDP growth between 2000 and 2007 was 4.9 percent. However, average growth has fallen to 3.2 percent annually from 2008 to 2013.

As a result, smaller companies started to fall behind in creativity andinnovation as they began to cut back on investment in R&D.

Of local companies’ cumulative investment in R&D, small and midsize companies with less than 250 employees accounted for 24 percent as of 2012. The OECD average is 33 percent.

The Korea Business Institute raised concerns that the potential for growth at small and midsize manufacturers will continue to retreat due to the pay gap with conglomerates and their diminishing ability to create jobs.

“It is essential that the government aggressively prepare measures, including customized R&D support policies tailored to specific small and midsize companies, and create a foundation that would ease the growing disparity between conglomerates and smaller companies by tightening regulations on conglomerates’ antitrust business practices and unfairly stealing technology and talent from smaller businesses,” said an analyst at the institute.